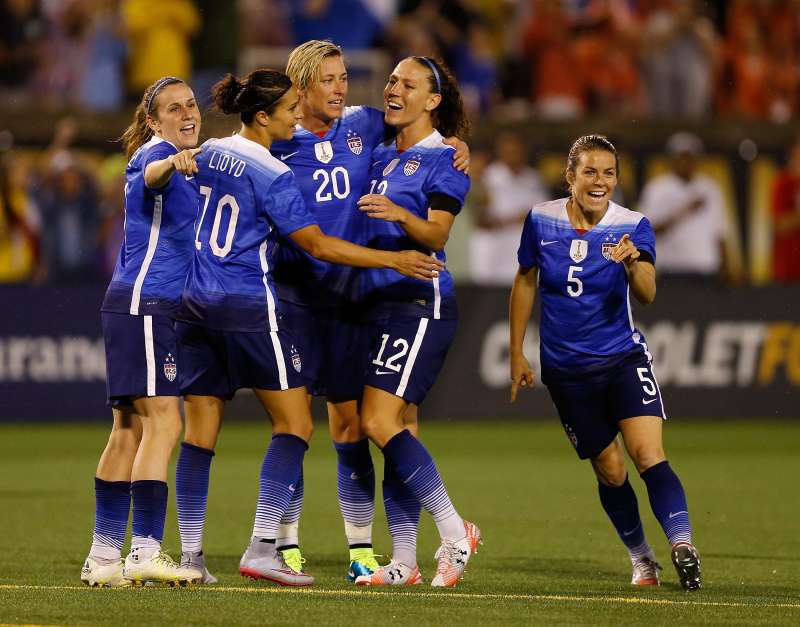 The U.S. women’s soccer team took a stand on equal pay Wednesday, filing a complaint against U.S. Soccer for wage discrimination. Women on the national team make about 40% of what their male counterparts do, the complaint alleges.

What’s particularly galling is that the official governing body of the sport in the United States is hardly the only organization affiliated with the sport that’s guilty of wage discrimination.

In U.S. professional soccer leagues, women also trail far behind men in terms of earnings. The National Women’s Soccer League has a pay ceiling per player of just $37,800. That’s compared to an average of more than $300,000 and a median of about $100,000 for men’s Major League Soccer. Each team in the NWSL has a salary cap of just $265,000—compared to more than $3 million for men.

Alex Morgan, one of the signatories of the complaint against U.S. Soccer, is the highest-paid American female soccer player. Her salary for the Portland Thorns, a NWSL team, is reportedly $450,000, and she also takes home about $1 million in endorsements from companies like McDonald’s and ChapStick. Still, her pay pales in comparison to male American players like Landon Donovan, who earned $2 million just from his team, let alone international superstars like Lionel Messi and Cristiano Ronaldo, who make tens of millions of dollars each year.

The pay gap is even more egregious when you look at the prize money offered by FIFA, soccer’s worldwide governing body. While the U.S. women’s team won $2 million from the organization for winning the tournament last year, the German men’s team collected $35 million after they emerged victorious at the 2014 World Cup, CNN Money reported. That amounts to female American players receiving less than 6 cents for every $1 earned by the German men.

Even worse, the 16 men’s teams that were knocked out in the first round of the 2014 World Cup each received $8 million, and the 11th-place U.S. men’s team took home $9 million. That’s right the American women’s team won less than one-fourth what the American men earned, and the poorer pay went to the squad that was crowned champions, not the team that failed to come anywhere near reaching the finals. Overall, the total payout for the women’s World Cup was $15 million—less than 3% of the $538 million total earnings from the men’s side.

Read next: 5 Reasons Why Tennis Should Keep Paying Men and Women Equally

FIFA is one of the most lucrative sports organizations in the world, with $5.7 billion in annual revenues. But giving women a bigger share of that money seems to be off the table for the foreseeable future.”That’s not even a question I will answer because it is nonsense,” FIFA’s secretary general said in 2014 regarding equal pay among the sexes. “We are still another 23 World Cups before potentially women should receive the same amount as men.”

If that winds up being true, female soccer players will be forced to wait until at least 2107 for the wage gap to close.

EDIT POST
this link is to an external site that may or may not meet accessibility guidelines.