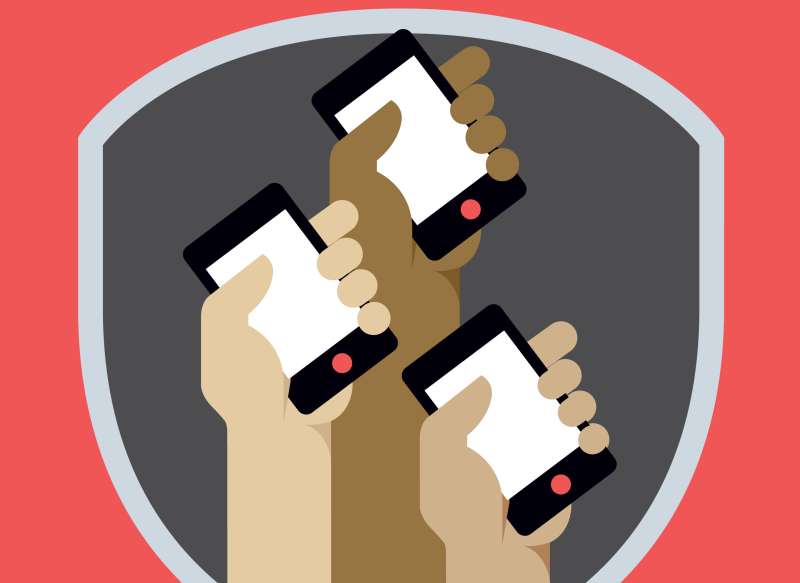 If you feel incomplete without a phone in your hand, you’re in good company. About three-quarters of Americans now own a smartphone, Pew Research Center reports. And roughly 45% of people say they are constantly connected during the workday, according to the American Psychological Association.

The average person uses about 4.5 gigabytes of data a month, up more than a third from the 3.3GB used on average a year ago, according to Brad Akyuz, a director at the NPD Group research firm who specializes in the mobile industry.

That’s partly because of increased video streaming, largely driven by social media use. Last year, more than 54% of all videos were watched on a mobile device—up from 17% in 2013, according to online video technology company Ooyala. “When you stream video, the data numbers go up exponentially,” Akyuz says.

Until recently, powering your data usage could be tricky—and expensive. But a radical reshaping of the mobile landscape means that’s no longer the case. Over the past year, the Big Four carriers—AT&T, Sprint, T-Mobile, and Verizon—have rolled out new, fiercely competitive unlimited data plans that eliminate once-burdensome overage fees.

It all started with T-Mobile, says Kristin Paulin, a senior telecom analyst at research and consulting firm Ovum. Last September, T-Mobile eliminated all of its traditional plans with specific data quantities, subbing in a single, competitively priced unlimited plan: T-Mobile One. Sprint followed closely behind, shaving $20 a month off its unlimited plan; AT&T also reshaped its own offerings. Finally, in early 2017, Verizon caved as well. “Verizon essentially had to succumb to the competitive pressure,” Paulin says.

The resurgence of unlimited plans has brought other shifts, experts say. The Big Four have sharply cut the number of plans they offer—to 35 from the 49 offered a year ago. That’s not necessarily a bad thing, says founder of plan comparison site Wirefly.com Logan Abbott: It simplifies the choice for heavy data users. “Most people just want the right amount of data for their usage,” he says.

All of these industry changes created a different set of parameters for this year’s Best Cell Phone Plans analysis. Download speeds and the quality of superfast 4G/LTE networks took on greater weight, as did concerns over various data restrictions imposed by carriers. “As smartphones have become lifelines, users expect these devices to work and also to work well,” Paulin says.

To choose the following winners, Money evaluated almost 100 plans from 15 companies with the help of data provided by BestMVNO.com. We compared cost per gigabyte, hidden fees, and national network quality, as well as data limits and speeds. We also ruled out providers who failed to meet our thresholds for customer service, data, and voice network quality. (See the full methodology here.)

What follows are Money’s selections for five of the best plans on the market now.

Even if you use your phone mainly for texting and talking, you’ll need a little data for things like checking email or exchanging photos via text. The challenge is, as a light data user, you’re in the minority—so there’s less competition among plans that fit your needs. For this category, we looked at plans with less than 4GB of data.

Why it wins: You may have never heard of Republic Wireless, but the five-year-old company has developed a cult following, says NerdWallet’s Sheehy. The backbone of Republic Wireless is hybrid calling, a technology that seamlessly transfers users between Wi-Fi and cellular networks for voice calls. Republic Wireless also prioritizes Wi-Fi for data use, so you’ll consume less than you would with traditional carriers. Pricing is transparent, with no fees, and if you have a heavy month of data usage, you can jump up from this $30-a-month plan to the next level—paying only the difference between the two plans—and then drop back again the following month.

Tradeoffs: Whenever you don’t have a Wi-Fi connection, your phone will switch to Sprint and T-Mobile networks, which Money found to be less reliable than those of the other two big carriers. And while Republic Wireless has increased the number of compatible devices you can bring to its network, you can’t currently use Apple products.

If you’re using social media, browsing the web, and occasionally streaming videos—which you’re probably doing more often, thanks to the rise of autoplay—you’ll need a plan with a decent amount of data. Smartphone users now generally consume about 4.5GB of data every month, so Money considered only plans that offered at least 4GB for this category.

Why it wins: With more than enough data for the average user, this $45 AT&T prepaid plan offers incredible value. It’s 20% cheaper than other plans with 4GB to 6GB of data a month—and you’re able to roll over any unused data to the next month. You also save by going with a prepaid plan, since those charge lower taxes and fees. “For the same amount of data, you’re spending $10 to $15 less a month” than with a traditional plan, says NerdWallet’s Sheehy. Adding to the plan’s value is AT&T’s network, whose LTE coverage and reliability put it in second place among the Big Four carriers, according to network researcher RootMetrics.

Tradeoffs: As with most prepaid plans, AT&T’s 6GB offering does have some compromises. This plan caps download speeds, which means the network may feel like a slower 3G connection. And it defaults to streaming video in standard definition to save on data. For HD streaming, you’ll need to change your account settings. If you go over 6GB per month, you won’t face overage fees, but data speeds will slow to a crawl.

If you’re streaming your favorite Netflix shows during your daily commute, you’re not alone—but you may need an unlimited plan to handle your video addiction. Despite the name, even unlimited plans may stumble on poor connections or data usage restrictions. For this category, Money prioritized network quality over price.

Why it wins: T-Mobile has revamped its unlimited plan since last September’s initial rollout and now offers the best value in this category. For $75 a month you get 4G/LTE data speeds—the fastest available—plus unlimited data at 3G speeds to turn your phone into a wireless hotspot. (Like most “unlimited” plans, T-Mobile’s may eventually tighten data speeds—but not till you’ve hit a very generous 32GB.) The plan also works well for travelers, as it includes unlimited texting and data abroad, plus an hour of Gogo Wi-Fi on every flight. And T-Mobile’s 4G/LTE network is widely available, with users reporting access to the highest data speeds 87% of the time, according to wireless research firm OpenSignal.

Tradeoff: T-Mobile One isn’t the cheapest unlimited plan on the market. If price is the most important consideration, Boost Mobile (which runs on the Sprint network) charges $50 a month for the first line. “If they have coverage in your area, it’s hard to beat that deal,” Abbott says.

If you and your partner are both average users, you can probably save some cash by signing up for one plan with two lines. For this category we considered only plans with at least 4GB each, to ensure you’d have enough data for using social apps, streaming music, and watching some video.

Why it wins: This plan provides 8GB per person—almost double what the average user needs—but at $90 a month, it’s pretty tough to beat its value. You’re paying about 33% less per gigabyte than you would for other plans with similar data allowances and network quality. Cricket also has an above-average customer service score from J.D. Power, and it runs on AT&T’s network, which is among the nation’s best.

Tradeoff: As a secondary carrier, Cricket is subject to an AT&T cap on download speeds at 8Mbps. That’s significantly slower than the fastest networks, which offer speeds consistently above 20Mbps. To conserve data usage, Cricket automatically streams video in standard definition unless you’re on a Wi-Fi connection. That’s good if you want to avoid maxing out your data limit, but you may notice the diminished video quality.

The younger the user, the higher the data consumption. For the family category, we looked at plans that offered two lines with at least 10GB—enough for extensive music and video streaming, for instance. The other two lines needed to offer at least 4GB of data, which should suffice for an average user.

Why it wins: Deep multiuser price breaks on T-Mobile’s unlimited plan make it an excellent value for a family. T-Mobile says it has focused on significantly expanding its 4G/LTE network in the past two years, and the resulting improvements have helped make the carrier’s offerings more attractive. For $140 a month with an autopay discount, you get access to an above-average network and a carrier that has the third-highest J.D. Power customer service rating of the 15 carriers we evaluated. The price includes taxes and fees—a no-surprises approach that’s unusual among the Big Four carriers—and data is unlimited, so you don’t have to worry about having your kids push you into overage charges. Like most unlimited plans, T-Mobile does start to restrict data speeds, but not until you hit 32GB, higher than nearly every other plan Money evaluated.

Tradeoff: If you value high-definition video streaming, you’ll need to pay an extra $5 per person each month. Otherwise the plan limits you to DVD-quality playback.

Pick the Plan for You

If none of these preceding plans fit your needs—if your family has more members, or fewer, for instance, or you need different amounts of data—Money has created a tool that can deliver a customized result. Answer a few simple questions and you’ll get personalized recommendations based on all the components you’re looking for.

Try it out below!

Why Isn’t My Carrier Here?

Each year Money hears from readers wondering why their carrier or plan isn’t among the winners. One common reason: The market teems with nearly 100 secondary players, which lease wireless and data services from the Big Four—and it’s nearly impossible to do a truly comprehensive evaluation of every plan offered. These smaller companies, known as mobile virtual network operators (MVNOs), can come and go quickly, says Joseph Paonessa, founder of BestMVNO.com, but they also can deliver a lot of innovation and niche offerings.

Ting, for example, was the first MVNO with an à la carte menu that lets customers mix and match levels of voice minutes, text, and data; you don’t pay for anything you don’t use. Ting is also known for strong customer service. But none of its offerings include unlimited talk and text, which we required to make fair price comparisons, so they didn’t make the final analysis.

TracFone, another popular MVNO, was in a similar position. It was once the go-to provider for prepaid plans, Paonessa says, and its market share still tops any company outside the Big Four. Yet TracFone remains competitive mainly with inexpensive plans designed for very light users—too basic for the categories we selected.

Finally, we considered Google’s Project Fi, a unique service run on a combination of Wi-Fi and cellular networks that reimburses customers for unused data. Ultimately, we found it too niche an offering. But its ultracheap prices may make it a good fit for someone who lives in an urban area, frequently travels internationally, and is willing to use one of the four Android models it allows.

This story has been updated to factor in new information on Cricket’s autopay discount, which changes the pricing for our Best Couples Plan winner.

We’ve included affiliate links in this article. Click here to learn what those are.