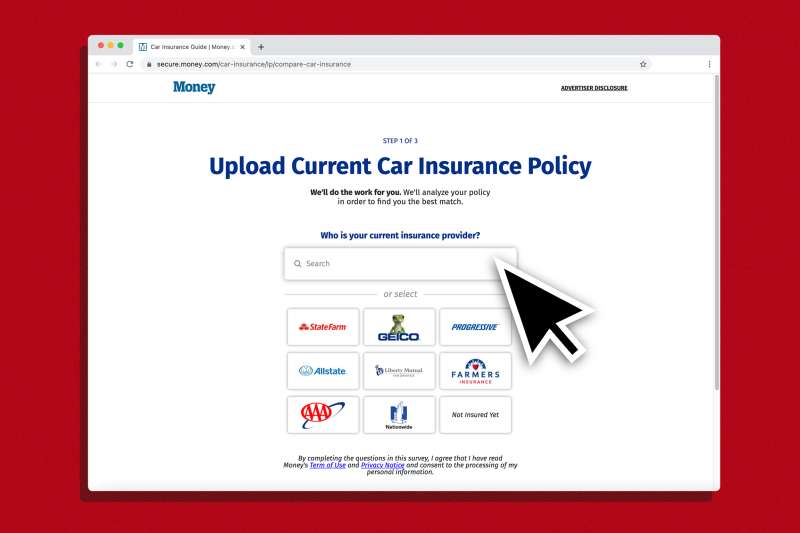 Car-insurance shopping is shifting towards online apps and websites that allow one-stop shopping for a policy, and now Money is stepping into the fray.

This week, we launched a new tool that allows you to get a snapshot of your current policy and see if you might save by switching insurers — without the fuss of getting quotes company by company.

Here’s more about the Money tool and how it works.

Picking a car insurance with a single application

Shopping for car insurance by calling insurers or visiting their websites is far from obsolete; indeed, that’s still the way most people shop for policies, according to Jornaya, a company that tracks online shopping trends.

But Jaimie Pickles, Jornaya’s GM of Insurance, says there was a 25% surge in visits to websites that pitch you simultaneously to multiple car insurers in 2020 — one of the biggest year-over-year shifts in shopping behavior the company has ever seen.

Comparison sites not only reduce calling around, but data entry as well. Rather than, say, going one by one to ten brand websites and filling out ten forms, you fill out only one.

Or not even one form, at least in full.

With services like Money’s new offering, for example, you can type in policy numbers from most major companies to trigger an automatic pull from your existing insurer of information including your drivers’ license, address, vehicles owned, and more.

You might, however, still need to enter some data that isn’t in your policy, at least in full, such as your date of birth and Social Security Number.

After the site secures your data, the results resembles those for similar tools to buy other financial products online, such as mortgages. You’re typically delivered either a list of companies or, the case of the Money tool, the name of a single company at the top, with alternative choices further down the page.

Car insurance savings are likely, but not guaranteed

The choices offered by a comparison site won’t necessarily be those offering the cheapest premium out there for you, warns Jornaya’s Pickles. It’s also possible that another company not on the site — and even one that is, but was outbid for your business — might offer you a lower rate than the company or companies the site presented, Pickles says.

But finding that carrier would demand additional work for the driver. And if you choose to share your policy information with sites like Money’s, we can analyze it to try and match you with an insurer that is likely to beat your current rate.

Getting a quote may require engaging with the insurer

The online comparison tools for other financial services, including life insurance, typically display online premiums without the need to communicate with the companies. But with car insurance comparison sites, after you’ve clicked to select the recommended carrier, it often requires a few more steps on the insurer’s site, and further information from you, before you get an actual quote. (That’s the case with Money’s service.)

How to make the most of comparison engines

No-one exactly relishes time spent on insurance shopping. One-stop car-insurance sites allow the potential to save money by seeking quotes, albeit indirectly, from more insurers than you’d likely ever have the time and stamina to pursue on your own.

Sites that populate your customer profile with data from your current insurer, as Money’s does, promise the greatest time savings, by minimizing data entry. Doing that allows prospective new insurers access to information that includes what you are paying for your current policy, giving them a benchmark to beat.

If you’re uncomfortable with such sharing, though, most sites that allow policy data to be extracted also allow a manual process. Money’s service allows that option.

The process should be private enough. As a rule, your email or other data will not be sold to other sites or directly to any insurance provider, but it’s worth clicking links to the privacy policy. Some sites, including Money’s, include that assurance beside the field in which you enter your email address.

Check it out here and see if you can save.