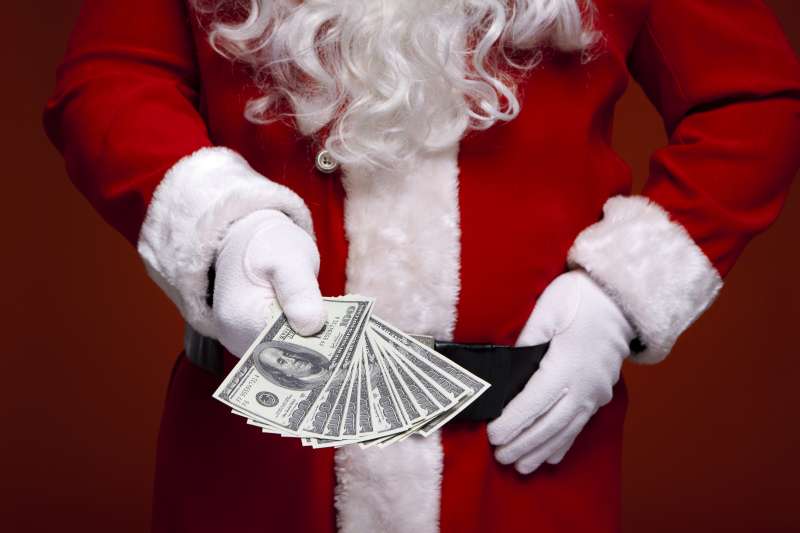 According to the 2014 Santa Index, a “study” created by the all-purpose insurance information site Insure.com, Santa Claus would earn $139,924 annually if he were paid fair wages for all of the jobs he handles.

Researchers at the site come up with the estimate by adding up the various tasks that constitute Santa’s job description. It goes without saying that Santa has quite a unique skill set, including roles as a reindeer handler, professional shopper, cookie taster, and private investigator (knows if you’ve been bad or good). The bulk of Santa’s estimated salary comes as a result of overseeing the toy workshop, a job that falls under the domain of industrial engineering and would earn the big guy $116,742 per year. Meanwhile, Santa’s piloting skills, which he uses just once a year when delivering toys on his sleigh, would earn the highest hourly wages ($62.31, so $623 for putting in a ten-hour shift on Christmas Eve).

When all of the 15 different components of Santa’s job are tallied up—based on mean hourly wages and the rough hours per year worked—the total comes to just under $140,000. That’s roughly $20,000 more than what the average stay-at-home mom is worth and double what the average SAH dad is worth, according to lighthearted studies conducted by the career-research site Salary.com.

The job (and estimated hypothetical salary) of stay-at-home parents is a combination of roles that are very different than Santa’s, including van driver, laundry operator, cook, psychologist, and (household) CEO. While Santa’s varied roles would mean he’d log in roughly 83 hours per week on the job—with much longer hours toward the end of the year, presumably—stay-at-home moms report enduring even longer work weeks, averaging 96.5 hours weekly.

Santa Claus’s bearded “helpers”—the imitation for-hire Santas who work the malls and holiday parties at this time of year—don’t earn anywhere near Insure.com’s estimated value of the true Santa Claus. While some lucrative Santa gigs pay upwards of $75 or even $300 per hour, wages of $15 to $20 per hour are more likely, and a hardworking Santa with regular assignments can expect to pull in somewhere between $5,000 and $15,000 during the winter holidays.

Meanwhile, many survey participants think that $140,000 doesn’t come close to what Santa deserves in an annual salary. In an Insure.com poll, 9% of consumers said Santa should earn more than $200,000 annually, and 29% said that he should pull in a whopping $1.8 billion per year—a flat $1 for each child under age 15 on the planet.

We can’t find a parallel survey indicating how much children think their moms should be paid for all they do. If the question were ever asked, it would be wise to answer that moms (and dads too, of course!) deserve to make at least as much if not more than Santa Claus. Santa would surely agree that there’s nothing more valuable than a good parent—and remember, he’s watching.