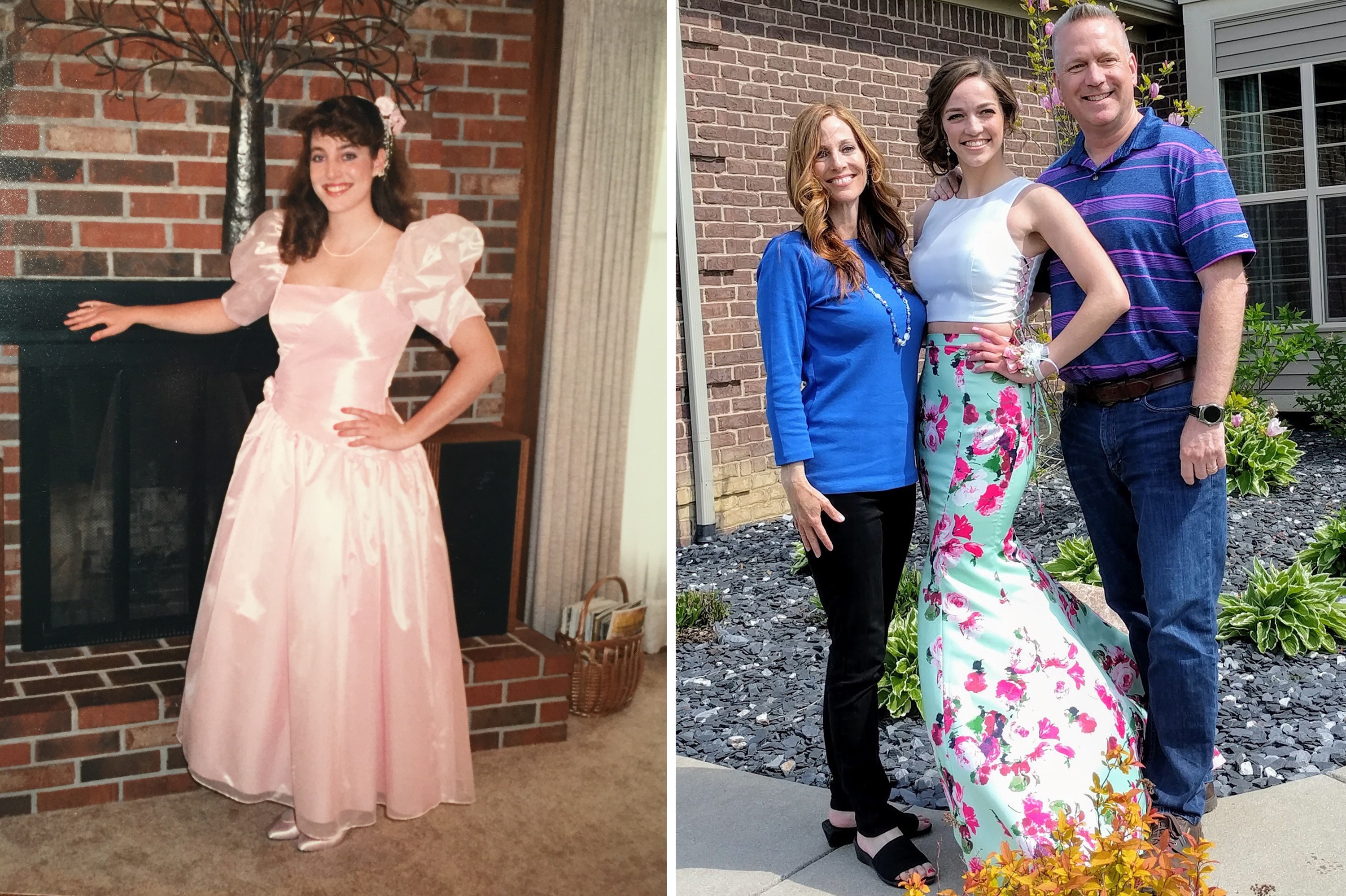 (left) Betsy Crapps dressed up for prom in 1988; (right) Betsy and Wally Crapps with their daughter, Katherine, before her prom in 2018.
courtesy of Betsy Crapps

Teens Are Spending Way More on Prom Than Their Parents Did. Here's Where the Money Goes

In 1988, the first computer virus hit the internet, George H.W. Bush was elected president and Rick Astley’s “Never Gonna Give You Up” unironically topped the charts. It was also the year Betsy Crapps went to prom.

Her dress was $50, pale pink and topped with puffy sleeves big enough to hide footballs in. She sprung for $15 shoes dyed to match the gown, did her makeup herself, and clipped a flowery barrette in her dark brown hair before dancing the night away.

Three decades later, in an era dominated by iPhone hacks, Trump tweets and “Despacito,” Crapps watched incredulously as her daughter Katherine prepared for her own prom. The costs racked up quickly: $125 for the dress, $100 for the ticket, $70 for hair, $50 for the party bus, $40 for nails and $20 for earrings — totaling over $400. The one thing she didn't spend money on? Just like her mom, she had her makeup done free of charge.

“Getting her hair done cost more than my prom dress,” Crapps, a 47-year-old director of religious education in Michigan, tells Money. “We never even thought about getting our hair and nails done. My first manicure was on my wedding day.”

Katherine Crapps gets her makeup done by her friend, Giovanna Scappaticci, for her prom in 2017.
courtesy of Betsy Crapps.

Obviously, the world has changed since Crapps was a teenager. Everything in 2018 is unapologetically extra, and prom is no exception. Although the basic costs generally haven’t outpaced inflation, making them relatively inexpensive, there are now a seemingly infinite number of things today's teens have to budget for, such as promposals that involve actual fires, pre-prom party catering, professional-grade photographers, eyelash extensions, Snapchat geofilters, afterparties on luxury yachts and camels.

So if you want to have the greatest night of your young life, it’s going to cost you.

One of the first-ever references to prom was in an 1879 version of the Harvard Crimson, in which a writer teased the rival Yalies for being thrifty at the promenade concert, according to Slate. It’s a major plot point in the John Hughes movie Pretty in Pink. Rapper Cardi B even recently reminisced about her own cheap date, telling Jimmy Fallon that he dumped her before the dance because he didn’t want to pay for the limousine.

Just how much are people dropping on prom these days? According to a 2015 survey from Visa, American families were spending an average of about $919 on their prom-goers. That was down only slightly from $978 in 2014; it peaked in 2013 with the average cost of prom being $1,139.

A major factor for any prom-goer these days can be boiled down to one word: fabulosity.

You need to look oh so fabulous for the dance, because that very look will be instantly and widely shared on Facebook, Twitter, Snapchat and Instagram. If your dad’s prom pictures had an audience of 20 in family members who physically huddled around a leather-bound photo album, today’s prom photos can easily be seen by the entire school, rival schools, county and world in seconds.

“Plans are much more oriented around how they’re going to look to other people, and that often ends up costing money,” says consumer psychologist Kit Yarrow, author of How Tweens, Teens and Twenty-Somethings Are Revolutionizing Retail. “The thought is not even about the event, it’s about how you’ll appear at the event.”

Another factor driving up expenses is that the dance has become a significant coming-out event for today’s young adults. Yarrow points out that millennials are getting married later, to the extent that the median age for first marriage recently reached its highest point ever

Without a wedding to celebrate and save for, prom has quietly become a bigger deal than in past decades. Teens across cultures today use the dance as “the big, dress-up, transition-to-adulthood event,” Yarrow says.

That’s something Heather Enright, a 47-year-old living near Fort Worth, Texas, can appreciate. When she went to prom in 1988, it was a town tradition for teens to show off their formalwear on the riverwalk. Because the whole city would see her dress, she felt inclined to splurge — to the tune of $100.

Enright says she realized it’s different for her children. They’re under a lot more pressure because of social media and the potential for #FOMO.

“There’s so much more comparison for them; they know what everybody’s doing,” she says.

Enright adds that she and her husband sat down with their son beforehand to set a budget, going item by item to figure out which expenses were most important to him and “think about what’s really do-able.” They used a family friend’s budget from a previous prom as a guide, and as the teen prepared for prom he kept track of the his costs in a note on his phone.

She admits that they did end up paying “a little more than what we would otherwise spend” because prom was a special occasion. They ultimately spent about $500 total on his prom last year, a sum that included two nights at a nearby lake house with about a dozen of his closest friends (and, of course, two dad chaperones).

But not every prom cost has risen dramatically. Ohio State University economist Jay Zagorsky has determined as much by tracking prom-related costs using data from the Bureau of Labor Statistics.

Back in 2014, he created a Prom Price Index by examining the changes in certain Consumer Price Index categories. He zeroed in on classic prom components like women’s dresses, men’s suits, haircuts, indoor flowers, full service meals and beer (because, inevitably, someone will sneak a six-pack into the gym). Then he weighted the various items based on what he saw his daughter spend on prom.

He found the dance is actually a pretty good deal. Since 1998, the Consumer Price Index has increased 54 percent, meaning that $1 then has the same buying power as $1.54 now due to adjustments in wages. But, according to Zagorsky’s weighted calculations, prom expenses from 1998 to now have only gone up about 25 percent.

Some aspects of prom are cheaper than others. Take men’s suits, for example: Zagorsky points out that the CPI has dropped 21 percent in the past 20 years, likely because the materials can be inexpensively imported.

Carl Nicpon, an executive with suit wholesaler Tuxedo Central, says those figures make sense on his end. Nicpon says that his wholesale tuxedo prices have risen a total of 4 ½% over the past five years.

Demand for dresses is steady, too — to the extent that they’re even recession-proof. The chief merchandising officer for PromGirl.com, Kimberly Collins, tells Money that 2008 was one of her company’s best years. Coming up with extra cash may have been difficult, but parents managed it anyway.

“It’s such an important event,” she says. “People save their money for this, and if everything else is going bad, this is the one thing they want to make sure is perfect for their daughter’s life.”

Gwen Stefani was #fashiongoals for Bree Davies when she went to prom in 1998. As such, her main expense was the dress: a $120 drapey red gown from Dillards paired with $70 Nordstrom heels.

But 20 years later, she realizes that the best part of the night wasn’t her outfit. It was driving around Denver in a fancy car and kicking back with friends at a hotel after the dance.

“Thinking back on it now, and knowing what kids look like now, I think how much we didn’t spend,” she says.

Prom centers around your outfit, yes, but it’s even more about the overall experience: waiting for it, shopping for it, photographing it, doing it, relaxing after it, thinking about it for the rest of your life. It’s unique that way, and in that sense it’s ideal for the latest generations of youth who value special experiences over material goods.

That one perfect, magical night is what 19-year-old Destiny Enriquez has been working toward for months. She’s been saving the money she earns from selling potato chips at her high school in order to afford her prom in San Antonio, Texas — costs that she says include “purchasing the prom ticket and the dress and all that... oh my God, so much.”

Prom isn’t until May 5, but she already has her gown, a maroon mermaid dress with gold beading all over the top. It was originally $350. Alterations drove the price up to $458, a bill she’s OK with because she says she’s short and more importantly, she’s never been to the dance before.

“I chose to wait 'til my senior year to make something out of it,” Enriquez says. “I didn’t have a quinceañera. This is my time to get all dolled up for once and go all out.”

She admits that it’s all adding up to be more than she was planning to spend, but she has no regrets — prom is priceless.

“After that we graduate. We go our separate ways,” Enriquez says. “I’m just trying to make memories.”