How to Watch the 2019 Women's World Cup Online for Free 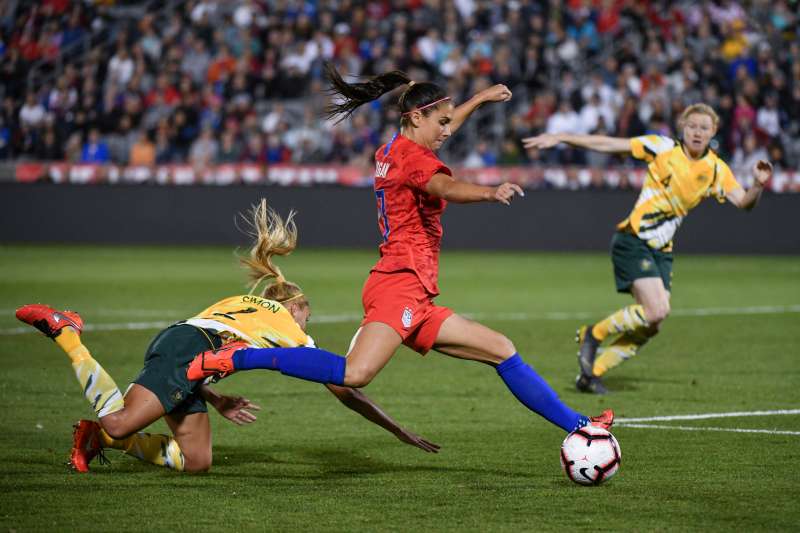 Alex Morgan #13 of the United States takes a shot in a match against Australia on April 4, 2019, in Colorado.
Michael Ciaglo—Getty Images

The FIFA Women’s World Cup 2019 stretches over the course of a month this summer in France, starting on Friday, June 7, and ending with the World Cup championship game on Sunday, July 7.

The U.S. women’s team is playing in France as the defending champions, coming off a World Cup victory four years ago in Canada, against Japan. U.S.A. is the favorite to win the women’s World Cup in 2019, with the overall #1 ranking in the world according to FIFA.

For the 2019 World Cup in France, Team U.S.A. is placed in Group F, along with Thailand, Chile, and Sweden. Among the star players for the U.S. World Cup soccer team this year are Alex Morgan, Julie Ertz, Carli Lloyd, and Megan Rapinoe.

Here’s all the information you need to watch the 2019 women’s World Cup — online or on TV, for free — including the details on when the U.S. women’s soccer team plays.

What Channel Is Women’s World Cup Soccer on?

To watch World Cup games televised on local Fox stations, you don’t need cable or another pay TV service. All you need in most of the country is a digital antenna hooked up to a TV. You can buy a basic HDTV antenna for about $25 to $30, and it works similarly to old-fashioned “rabbit ears” antennas: Once it’s connected to your TV, you can tune in local affiliates of free, over-the-air networks, including Fox, ABC, CBS, and NBC.

The variety of TV channels you can watch for free with an antenna differs based on a number of factors, including where you live, the capability of your TV antenna, and where the placement of the antenna is in your home. Considering an HDTV antenna lets you watch unlimited TV for free, it’s a great investment if you don’t want to pay for cable or another service. It’s also worth moving the antenna around to different locations in your home, to see where you can tune in the most free TV channels.

To watch 2019 women’s World Cup games airing on FS1, you’ll most likely need a cable TV or satellite TV package. Fox has a search tool to help you find out what channel FS1 in your TV package; just plug in your zip code and TV provider. If you don’t have cable, consider looking into live streaming TV options — which are often available for free to new subscribers during trial periods.

In addition to Fox stations broadcasting World Cup games on TV, Fox has women’s world World Cup live streams available at FoxSportsGo.com and the Fox Sports Go app. To watch the women’s World Cup online for free with a Fox live stream, however, you must log in with a participating pay TV account and password.

To watch the women’s World Cup online in Spanish, you can check out the Telemundo Deportes app or the NBC Sports app.

Another way to live stream women’s World Cup games is to subscribe to a live-streaming TV service that includes FS1, local Fox stations, or the appropriate Spanish-language channels in its bundle of channels. These services are similar to traditional cable TV, with dozens of pay channels packaged together for one monthly bill, but with live-streaming TV you watch channels online (on a smart TV or other connected device) rather than through a cable box connected to your TV. All of these services come with free trials lasting five to seven days for new subscribers, so you can try them out while watching 2019 World Cup games online for free.

The live-streaming TV services FuboTV, Hulu Live, DirecTV Now, Playstation Vue, and YouTube TV all come with FS1, along with local Fox channels in most of the country. The prices for these services are around $40 to $50 per month for the base package, though, again, all come with free trials.

Another, cheaper live-streaming TV option is Sling TV, which is available for only $15 for the first month ($25 monthly afterwards). The Sling Blue package comes with FS1, and local Fox channels are available with Sling TV in some (but not all) markets.

For an updated list of TV broadcasts for 2019 FIFA Women’s World Cup games, check out the Fox Sports TV schedule or the official FIFA match schedule.

Here’s the World Cup game schedule for the early part of the tournament: