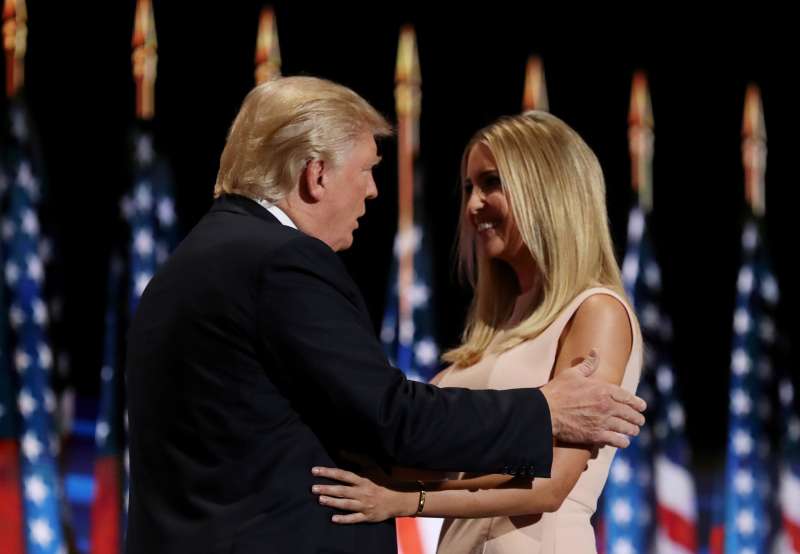 Donald Trump said he hopes his daughter Ivanka would leave her job if she were ever the victim of sexual harassment.
Joe Raedle—Getty Images

If you’re a woman who has ever been sexually harassed at work, Donald Trump has some advice for you: Quit your job.

In an interview with USA Today, Trump said that if his eldest daughter Ivanka were ever treated in such a way, he “would like to think she would find another career or find another company.”

The line of questioning came in response to a recent lawsuit from former Fox News anchor Gretchen Carlson that now-former company CEO Roger Ailes had sexually harassed her. Other women have also claimed that Ailes harassed them as well. As the allegations against Ailes stacked up — including back-up from another prominent female anchor, Megyn Kelly — Trump told NBC’s Chuck Todd last month that, “Some of the women that are complaining, I know how much he’s helped them … all of a sudden, they’re saying these horrible things about him.”

Ivanka’s brother Eric defended his father’s comments in an interview with Charlie Rose on CBS This Morning, saying,

Of course, it’s probably not possible for most women to be able to quit their jobs without a back-up plan. What’s more, some women might not be legally be able to do so if they’re bound by a contract that forbids them to talk to competitors.

And perhaps most strikingly, Trump ignores the basic issue of fairness at play: Why should a woman be forced to upend her professional life while her harasser gets off scot-free?

Read More: What Constitutes Sexual Harassment in the Workplace?

Jane Hall, a journalism professor at American University, pointed out in a New York Times op-ed in June that even women sometimes can misunderstand the intricacies of sexual harassment. “I suspect that there is a connection between the unspoken requirement for many women on Fox News, and elsewhere on television, to be leggy and beautiful and smart — and the bullying, misogynist political culture in which we find ourselves today,” she wrote.

Of course, however “beautiful” or “leggy” a woman’s appearance, she’s not responsible for sexual harassment. And there’s much more you can do other than quitting your job if you find yourself the victim of sexual harassment at work, like documenting the behavior, filing a complaint and even seeking outside counsel like that of a lawyer.