How a Harvard Economist Would Make Free Tuition Even Better 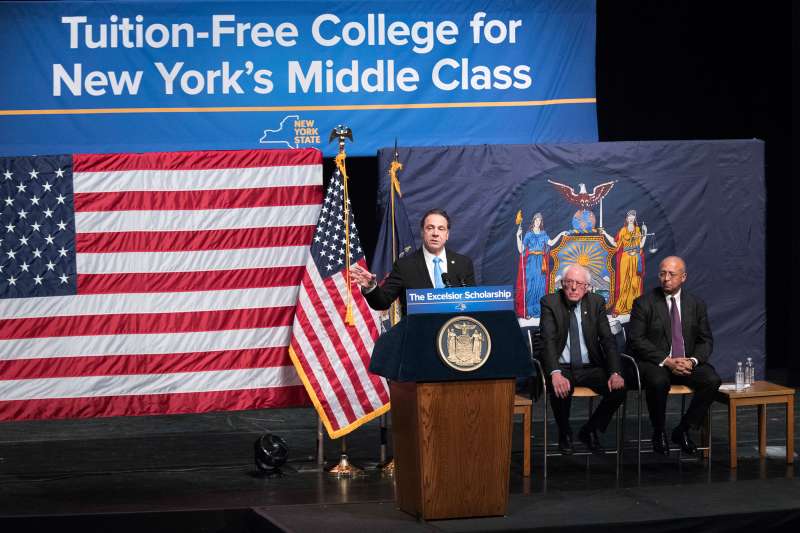 New York Gov. Andrew Cuomo, left, is joined by Vermont Sen. Bernie Sanders, center, and Chairperson of the Board of Trustees of The City University of New York William C. Thompson, as he speaks during an event at LaGuardia Community College, Tuesday, Jan. 3, 2017, in New York. Gov. Cuomo announced a proposal for free tuition at state colleges to hundreds of thousands of low- and middle income residents. Under the governor's plan, which requires legislative approval, any college student accepted to a New York public university or two-year community college is eligible, provided their family earns less than $125,000.
Mary Altaffer—AP

The beauty of free public college proposals is their simplicity: Remove the barrier of high tuition costs and you’ll open the doors to wider economic prosperity. Easy, right?

The rising cost of a college degree is only one-half of the problem. The other? Far too few students who start college actually go on to earn a degree. And free tuition models could exacerbate that problem by increasing enrollment at already under-resourced state colleges without improving colleges’ ability to handle an influx of students.

The solution, according to a paper released today by Harvard economist David Deming, is to provide states with a financial incentive to focus on improving outcomes while also reducing costs to families. Deming is suggesting Congress establish a matching grant program, to be paid by the federal government to states with free tuition programs. States could earn up to $5,000 per student to be spent in two specific categories: instructional quality and academic support.

His main goal is improving retention and graduation rates. As college enrollment has grown dramatically in the past three decades, college completion, has been relatively static. About six in 10 students at public, four-year colleges graduate within six years, and four in 10 students who start at a community college go on to earn a degree, according to the data from the National Student Clearinghouse Research Center.

What’s more, income gaps in college completion have increased, despite a growth in need-based financial aid that has allowed a wider demographic group to enroll in college.

New York received much attention earlier this month after it approved free tuition for state residents who attend City University of New York and State University of New York colleges full-time. But five others states—Delaware, Kentucky, Minnesota, Oregon, and Tennessee—have programs for free community college. Several others are considering legislation.

Tennessee, which was the first state to implement a nearly universal free tuition program, has seen roughly 30% growth in its first-time freshmen population at community colleges since the program started in 2015.

Yet if states don’t increase spending to support more students on campus, the same pot of money will be stretched over a larger share of students.

“You’re going to get low tuition, low spending, low completion rates,” Deming said while presenting his proposal at an event sponsored by The Hamilton Project at the Brookings Institution.

Even as the economy has rebounded, per-student support for higher education is lower in 45 states than it was pre-recession. Plus, tight state budgets make increased higher education spending in the future unrealistic, especially as pension obligations for state university employees eat up a larger share of public university budgets.

And providing more money for student support would help community colleges and less-selective public colleges replicate services that are already offered at flagship state universities, the report says. In 2013, academic support was 10.3% of spending at selective four-year public colleges, compared to 8.5% and 7.1% at less selective four-year colleges and community colleges, respectively.

The proposal would require colleges receiving money to, at a minimum, keep instructional spending levels the same as they were before the grant, and would require colleges to keep administrative spending steady relative to instructional spending. The proposal also calls for a program to offer a larger grant to colleges that have successful programs to increase degree completion among low-income students.

Deming estimates that if every state instituted a free college program, the match would cost the federal government up to $14 billion at the two-year level and up to $29 billion at the four-year level.