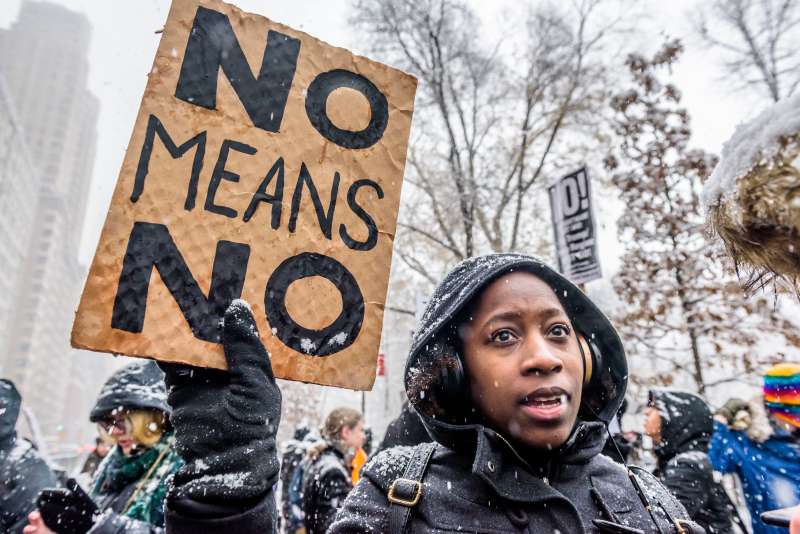 The #MeToo rally took place outside the Trump International Hotel at Columbus Circle, The #MeToo movement ignited after sexual harassment allegations against Hollywood producer Harvey Weinstein surfaced and opened the floodgate not only for women, but also men who have been victimized by predatory behavior and sexual misconduct, to tell their stories.
Pacific Press—LightRocket via Getty Images

Congress just added $16 million to fight workplace sexual harassment and discrimination – as the #MeToo and Time’s Up movements are shining a spotlight on how women and minorities are treated at work.

Slipped into the $1.3 trillion spending bill that President Donald Trump signed last week was a budget increase for the Equal Employment Opportunity Commission, the federal agency responsible for enforcing federal laws banning harassment and discrimination. It is the first budget increase for the EEOC in eight years – and comes after years of staffing cuts and hiring freezes.

Officials hope the infusion of new funding will help them more quickly and thoroughly handle sexual harassment complaints and education. Average wait times for complaints at the commission was up to 295 days, according to a USA Today report from November 2017.

“Going forward, I will ensure that we use these additional funds judiciously to enhance the agency’s work — especially as to harassment prevention,” said Victoria Lipnic, the acting chair of the EEOC, in a statement after the funding bill’s passage last week.

In her budget justification to Congress, Lipnic cited sexual harassment as a key issue for the commission to tackle in the next several years. “In the wake of accusations against numerous public figures, the Commission’s expertise and experience enforcing the law has been called upon over and over again,” Lipnic wrote.

The increased funding, can help fix a backlog in cases, Lipnic said. In a recent interview with Money, Lipnic emphasized that increased conversations about sexual harassment in the workplace does not mean the number of complaints or charges filed have increased. “What we’re seeing now is that we’re exposing what’s been there all along,” she said.

The EEOC is also in the process of releasing updated enforcement guidance on sexual harassment for employers to follow. Last updated in the 1990s, the guidance focuses on legal issues surrounding sexual harassment, including related case law.

“This whole national conversation and national story about sexual harassment being a problem in many of our nation’s workplaces? That is not news to the EEOC,” Lipnic said.

Updating the legal guidance for employers was one of many recommendations the EEOC made back in June 2016 when it released a comprehensive set of guidance on preventing sexual harassment. Notable conclusions and recommendations from the report, led by Lipnic, included encouraging employers to conduct workplace climate surveys, hold better training workshops for mid-level and senior supervisors and make harassment prevention a priority in a company’s strategy, among a host of other proposals.

The June 2016 report also notes the least common response to sex-based workplace harassment was to report it, internally or legally. However, the #MeToo and #TimesUp movements have attempted to eliminate the stigma or fear those experiencing workplace sexual harassment may feel, with thousands of women sharing their experiences in recent months and high-profile individuals receiving punishment for harassing their coworkers.

The process of filing a claim takes a while, however, but the legal defense fund promoted by Time’s Up and additional resources now approved for the EEOC could provide aid. For employees experiencing sexual harassment in the workplace, the next steps now may be more accessible.