The U.S. Department of Education today laid the groundwork for the type of customer service federal loan borrowers can expect in the future.

Among the goals: customer service that's consistent for all borrowers, more oversight and accountability to ensure fair treatment of borrowers, and a streamlined process for accessing information about and repaying loans.

The initiative is part of a huge overhaul in how federal student loan borrowers will manage their monthly debt payments, enroll in alternative repayment plans, and get advice when they're struggling with their payments. Instead of just handing off borrowers to outside contractors, called loan servicers, the Department of Education will consolidate that work into a single web portal overseen by the Office of Federal Student Aid.

What does that mean for borrowers? In theory, a system that makes it easier to manage and repay their loans.

But there’s a lot that’s still unknown. Most obviously: when this new platform for federal student loans will be available for borrowers to use.

The education department announced three finalists for handling the customer service work last month, all which are existing loan servicers. King said Wednesday that choosing which servicers will ultimately interact with borrowers is a multi-step process, but that the initial contract will go out by the end of this year. 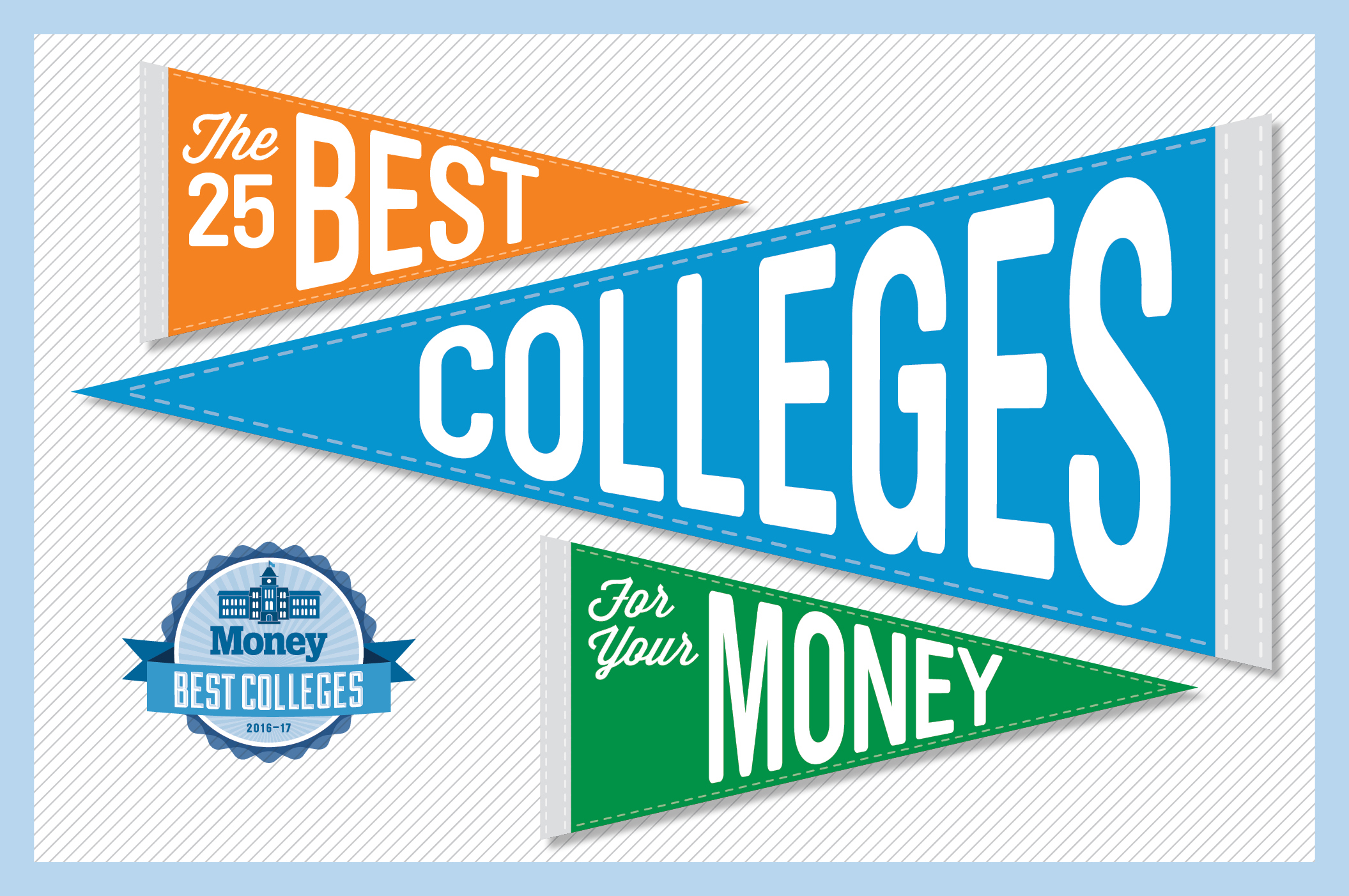 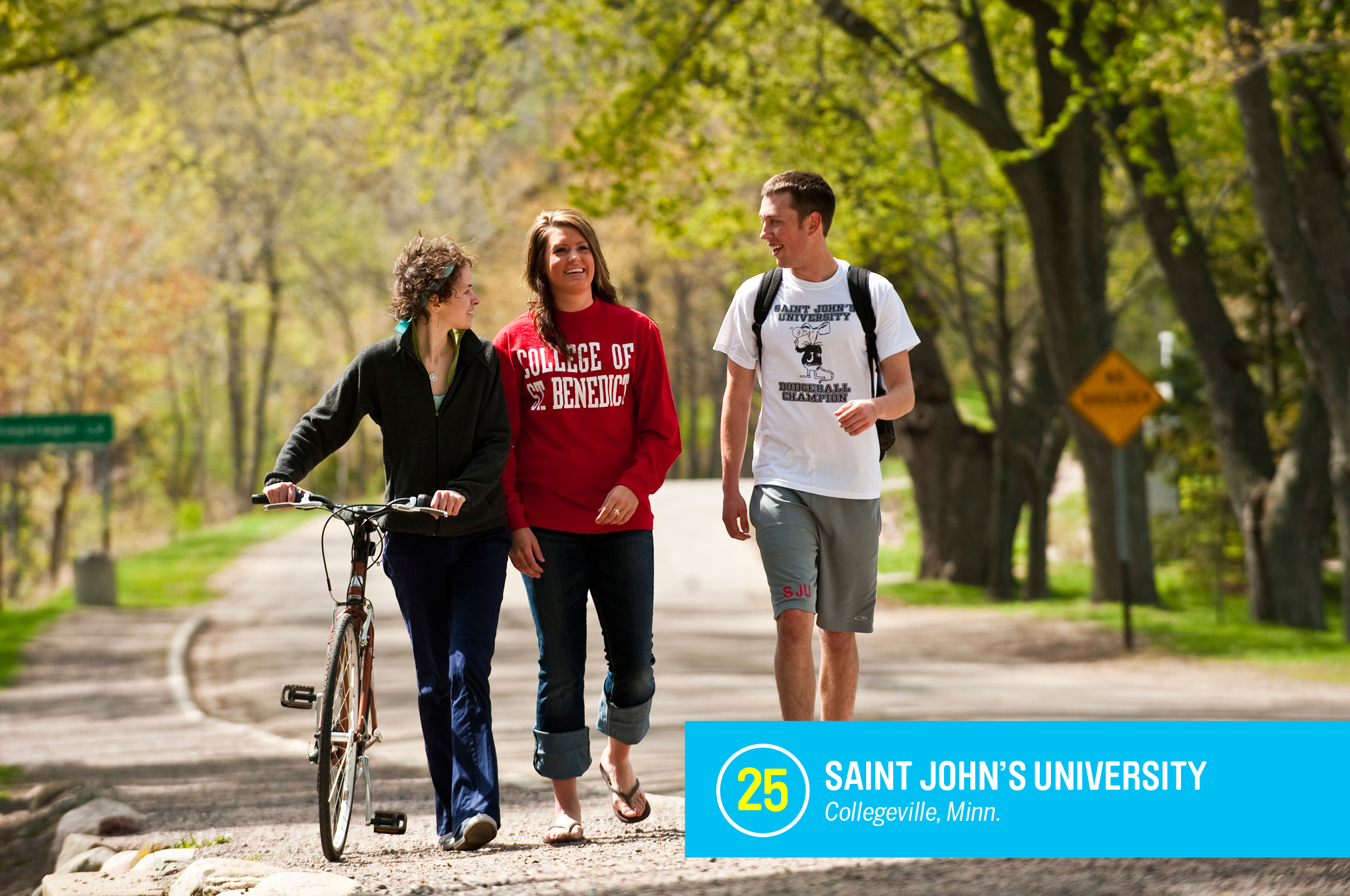 Saint John’s University is a Catholic school for men that partners with a nearby women’s school, College of Saint Benedict, to share academic programs and campuses resources. Nearly 80% of students at Saint John’s graduate within six years, 12% higher than similar schools. FULL PROFILE
Courtesy of St. John's University 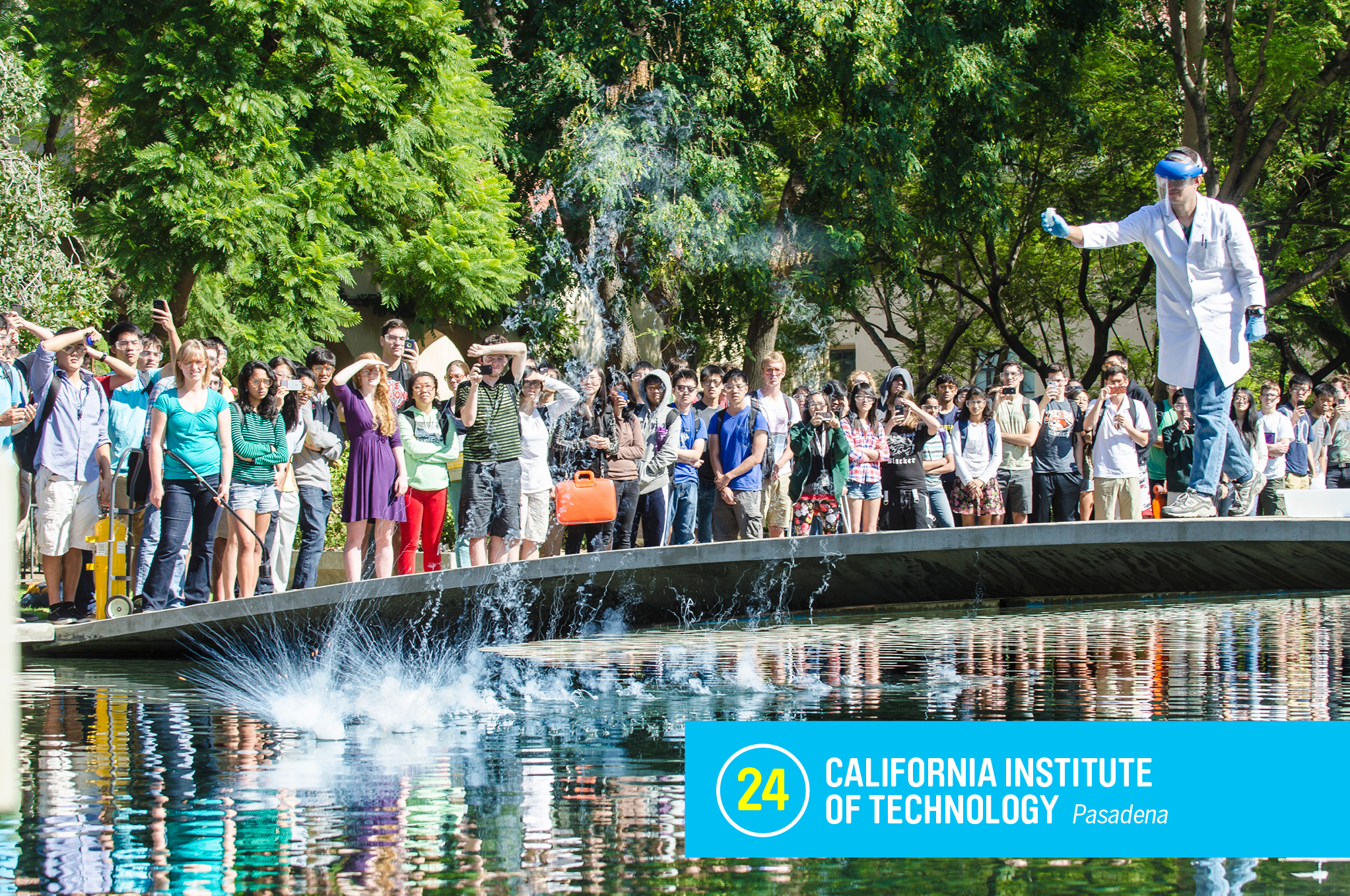 Recently admitted CalTech students scored about 1600 on average on their SATs—higher than at MIT or Stanford. Professors are notoriously hard graders. The school boasts 34 Nobel laureates among alumni and faculty. Recent grads tend to get high-paying jobs. FULL PROFILE
Courtesy of California Institute of Technology 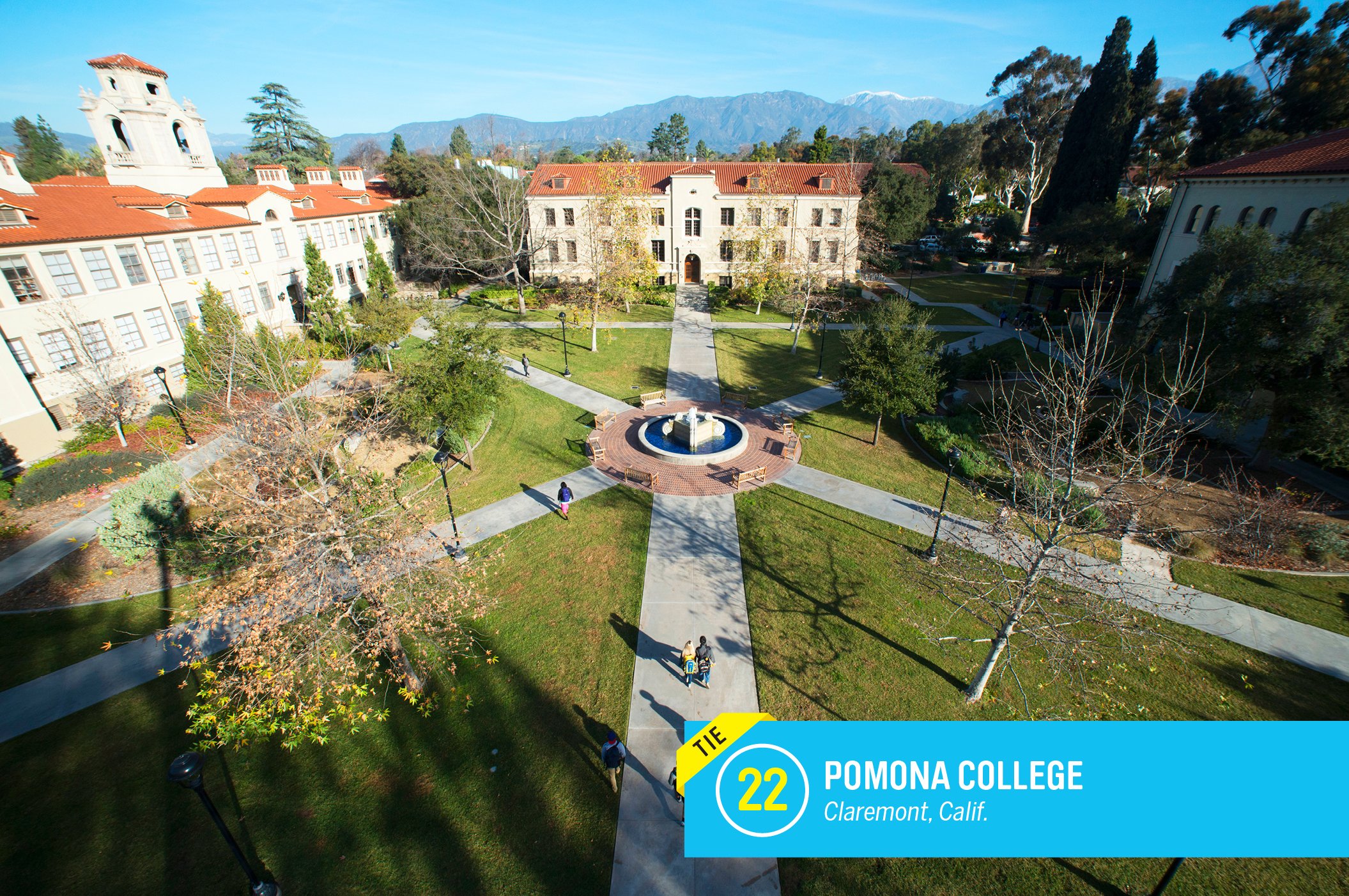 Pomona is among the handful of schools vowing to meet student’s full demonstrated need with aid, so more than 70% of grads have no student debt. With 1,600 undergraduates, Pomona features close student-faculty relationships. FULL PROFILE
Courtesy of Ponoma College 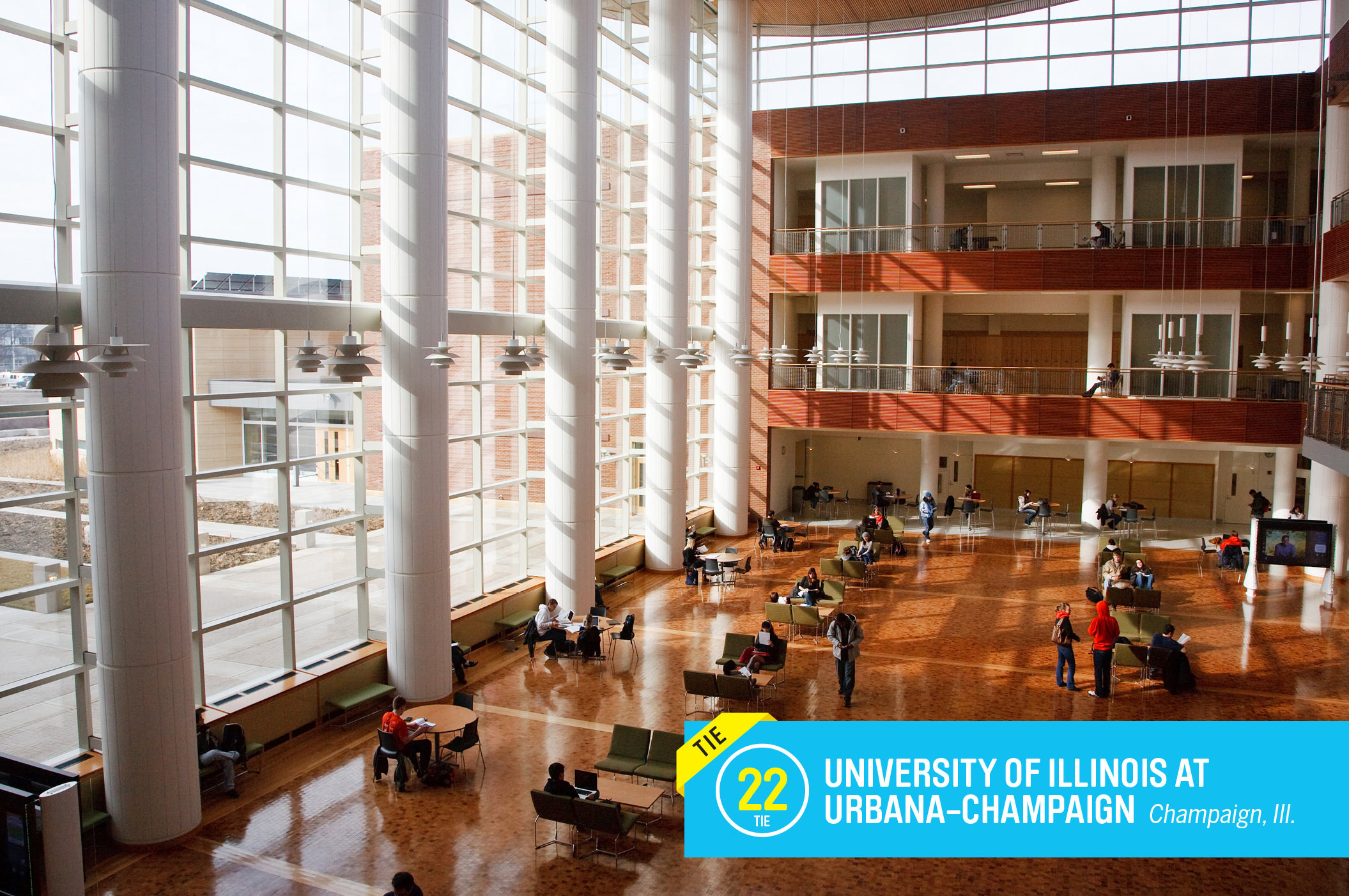 Illinois’s flagship university is among the top 15 public schools on the National Science Foundation’s list of high research spenders, and its strongest programs include accounting, engineering, and physics. Students also have access to the country’s second largest university library system. (Only Harvard’s is larger.) FULL PROFILE
Courtesy University of Illinois 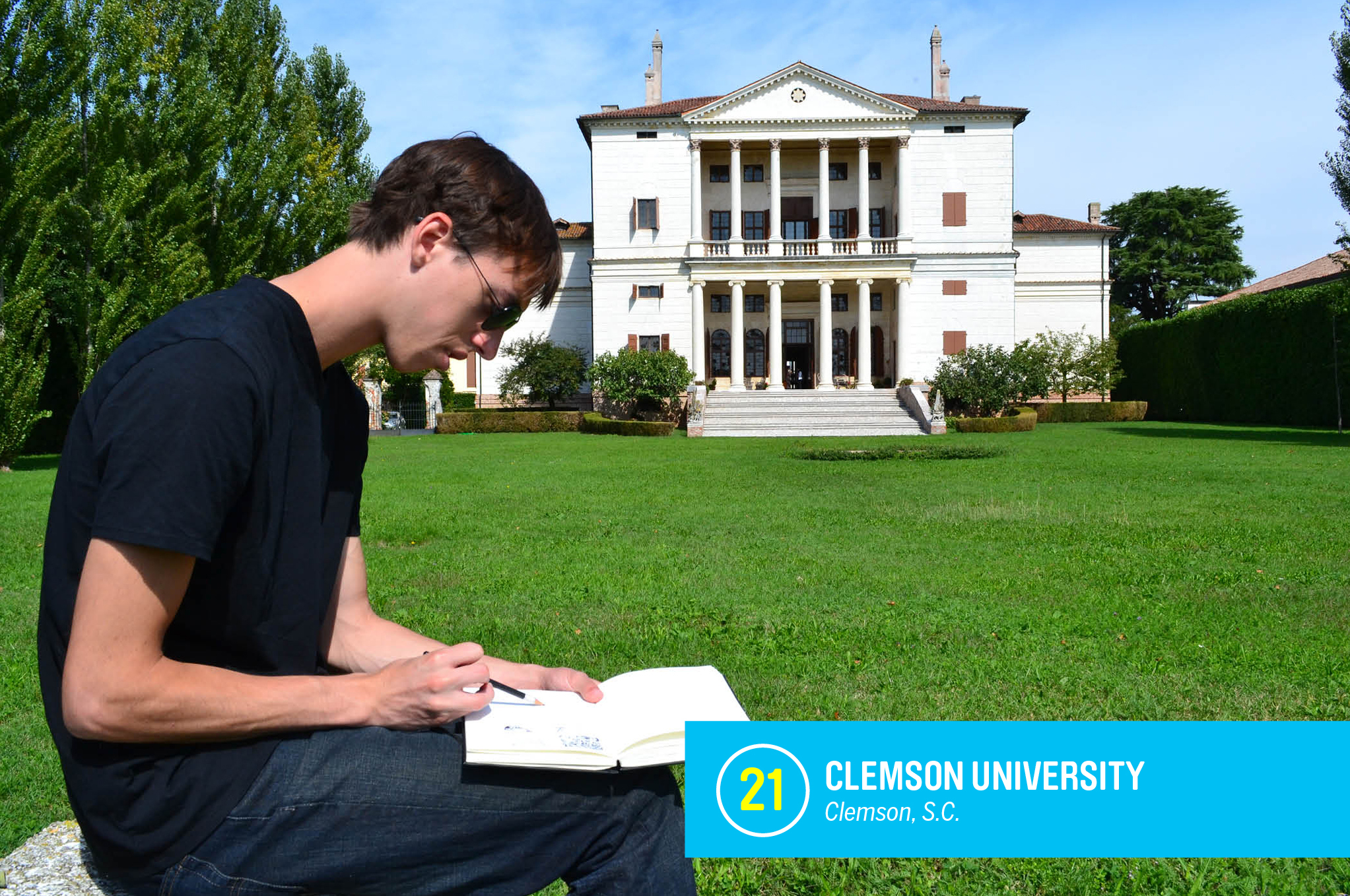 Clemson was founded as an agricultural college, and while agricultural science is still a specialty, more general programs such as business are more popular today. Most every one at this rural campus is united by an enormous amount of school pride, especially around the football team. FULL PROFILE
Courtesy of Clemson University 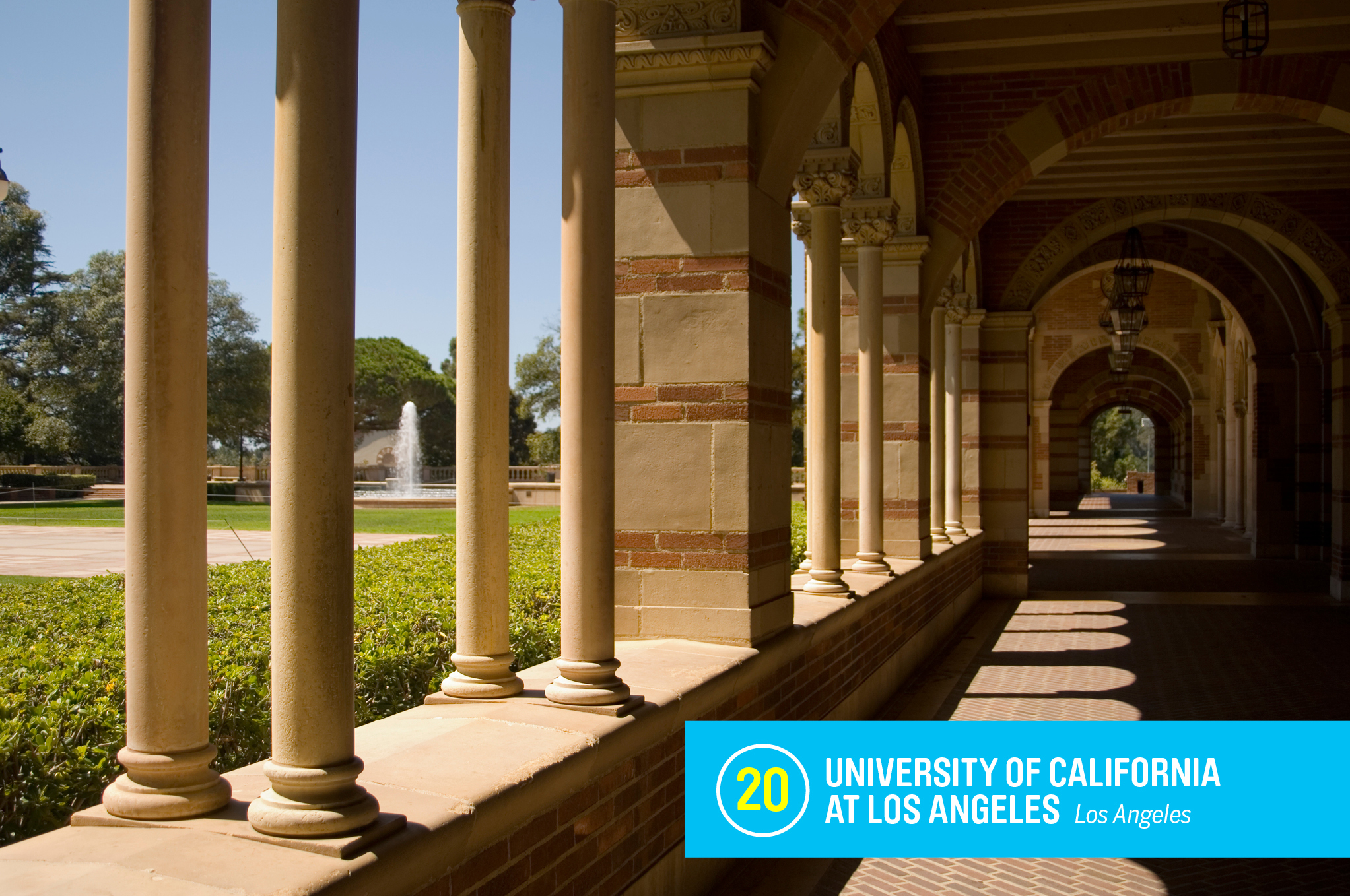 UCLA produces a lot of stars: professors like Internet pioneer Leonard Kleinrock, grads in show business like Ben Stiller, and others in pro sports like Kareem Abdul Jabbar. The school also supports ordinary students as well, with more than one third from low-income families. FULL PROFILE
Courtesy of UCLA 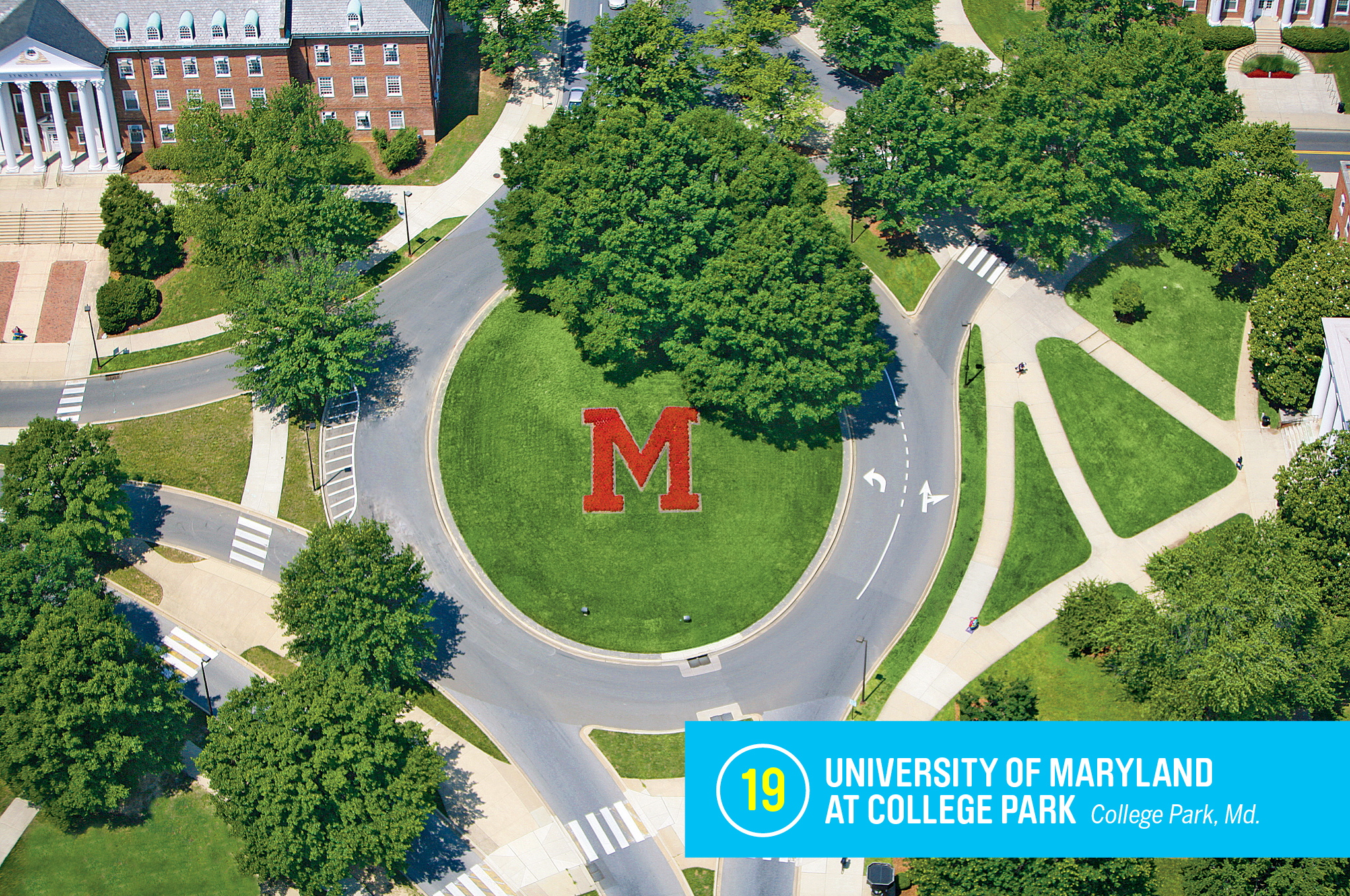 Like most large public schools, the University of Maryland has some all-star professors. The faculty roster boasts three Nobel laureates, two Pulitzer Prize winners and, thanks to the campus’s proximity to Washington, D.C., leaders in major positions at federal agencies like NASA and the National Institutes of Health. FULL PROFILE
Courtesy of University of Maryland 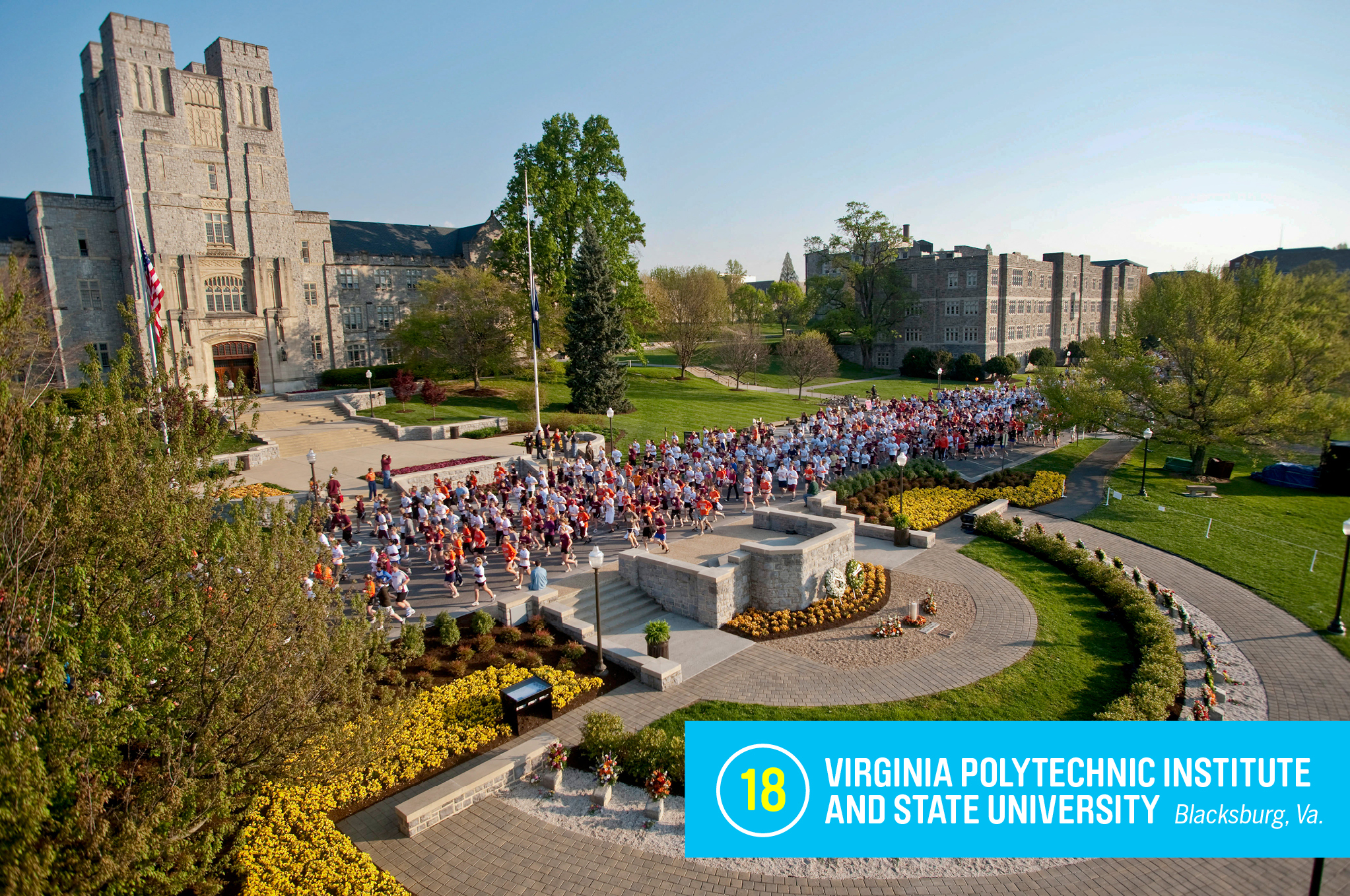 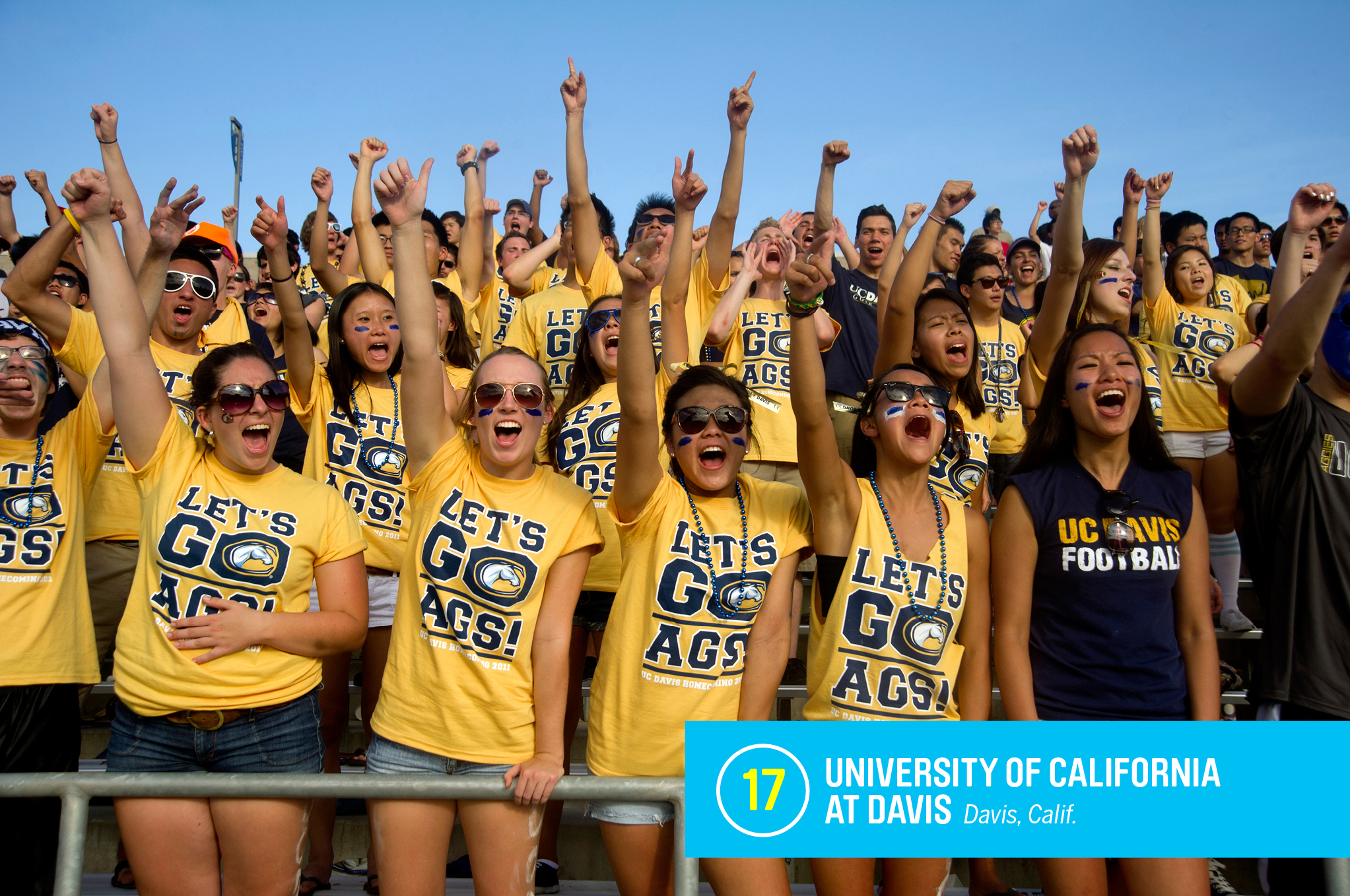 UC–Davis has made a reputation as an affordable school that produces results. About 43% of students are low-income, but its six-year graduation rate is a high 83%. The school is best known for its agriculture and animal science specialties. FULL PROFILE
Courtesy of University of California 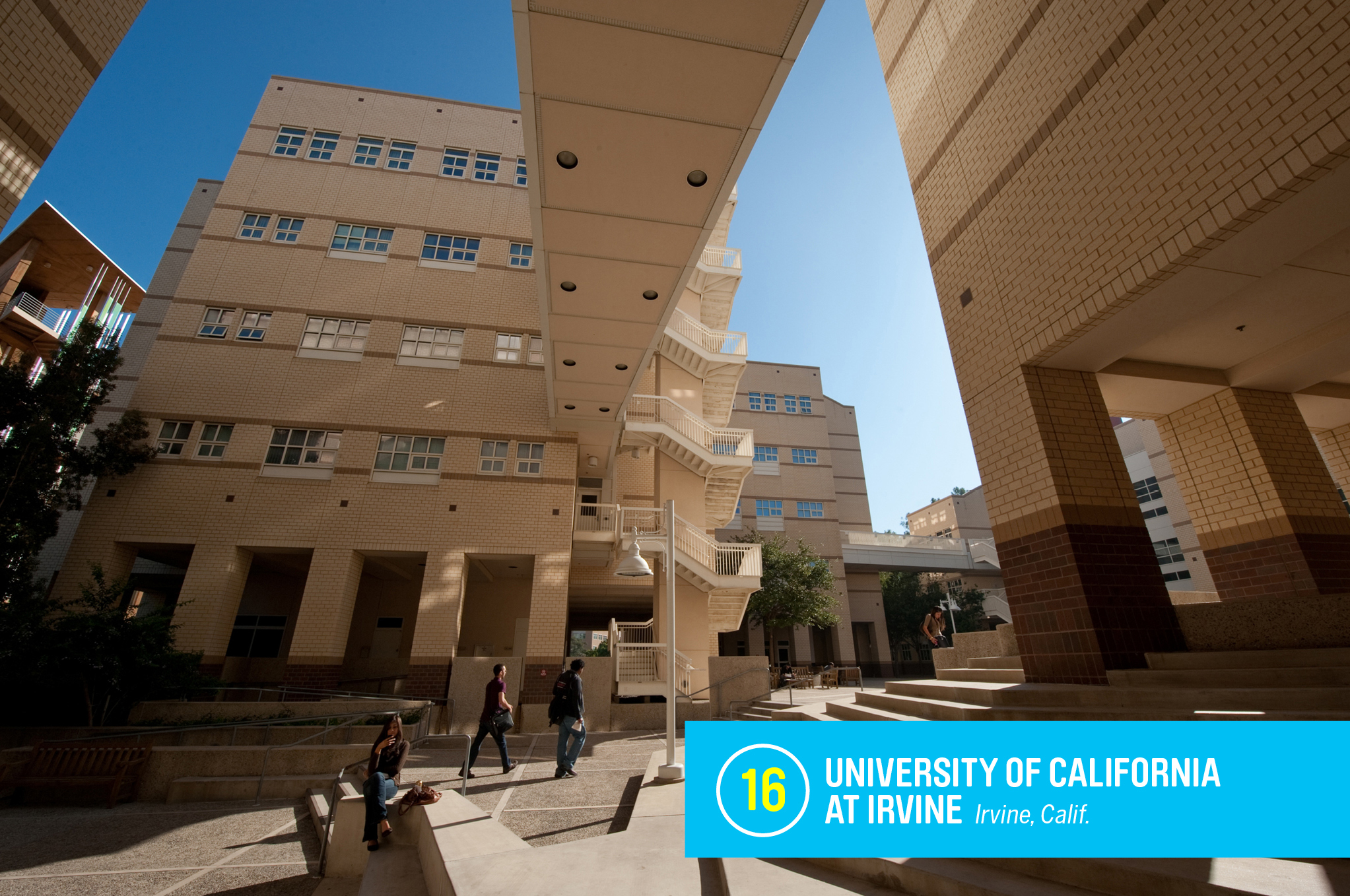 UC-Irvine shines in serving one of the most diverse student bodies in the country: More than 40% of students come from low-income families. Yet the school still boasts an 86% graduation rate—an impressive 41% higher than similar colleges. FULL PROFILE
Courtesy of University of California 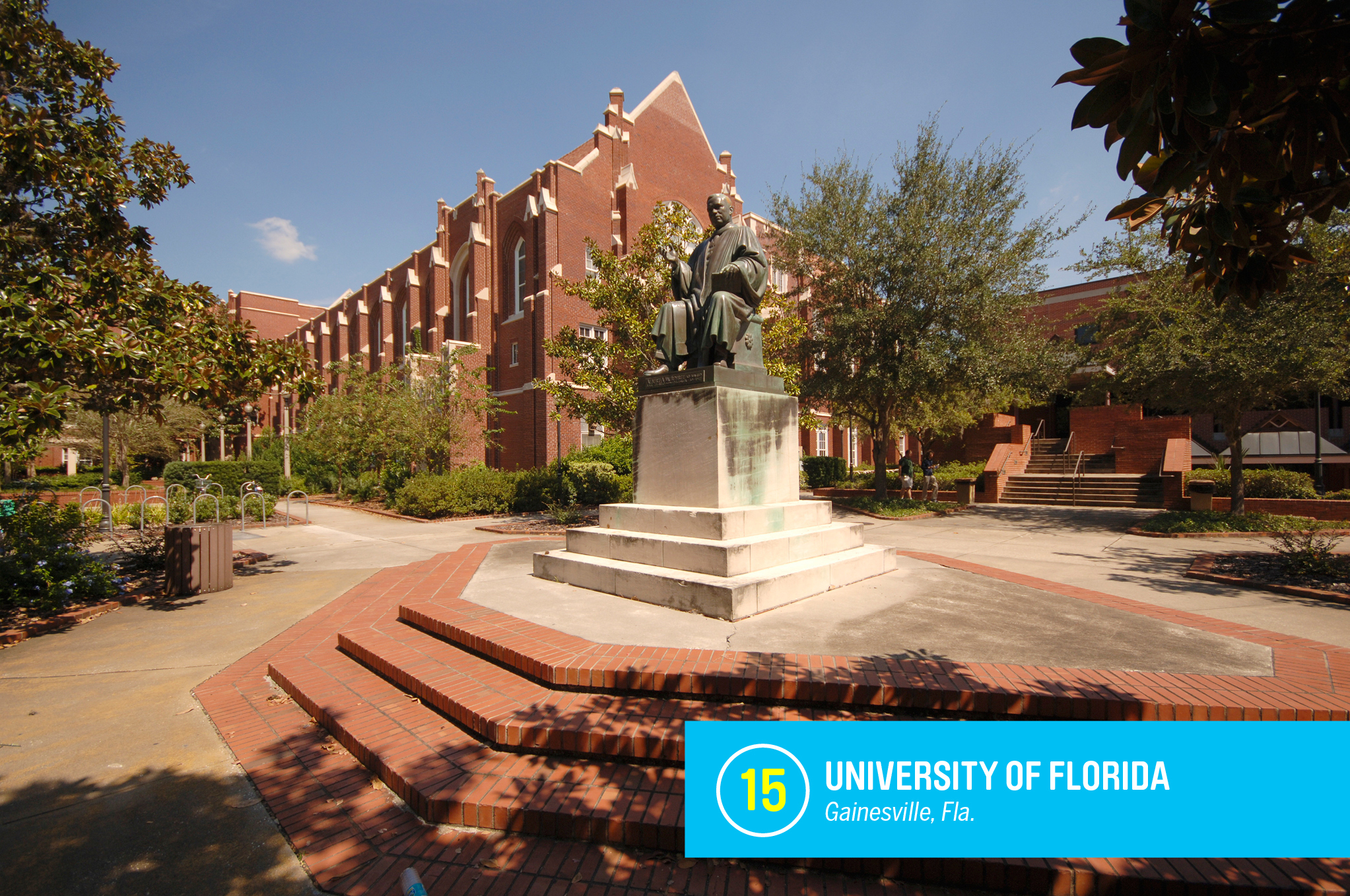 The University of Florida is one of the biggest bargains in higher education, with tuition of just $6,300 a year for Floridians. For that low price, students get access to some of the world’s top professors, well-respected programs in fields as diverse as astronomy and journalism, and sports teams that often dominate their leagues. FULL PROFILE
Courtesy of University of Florida 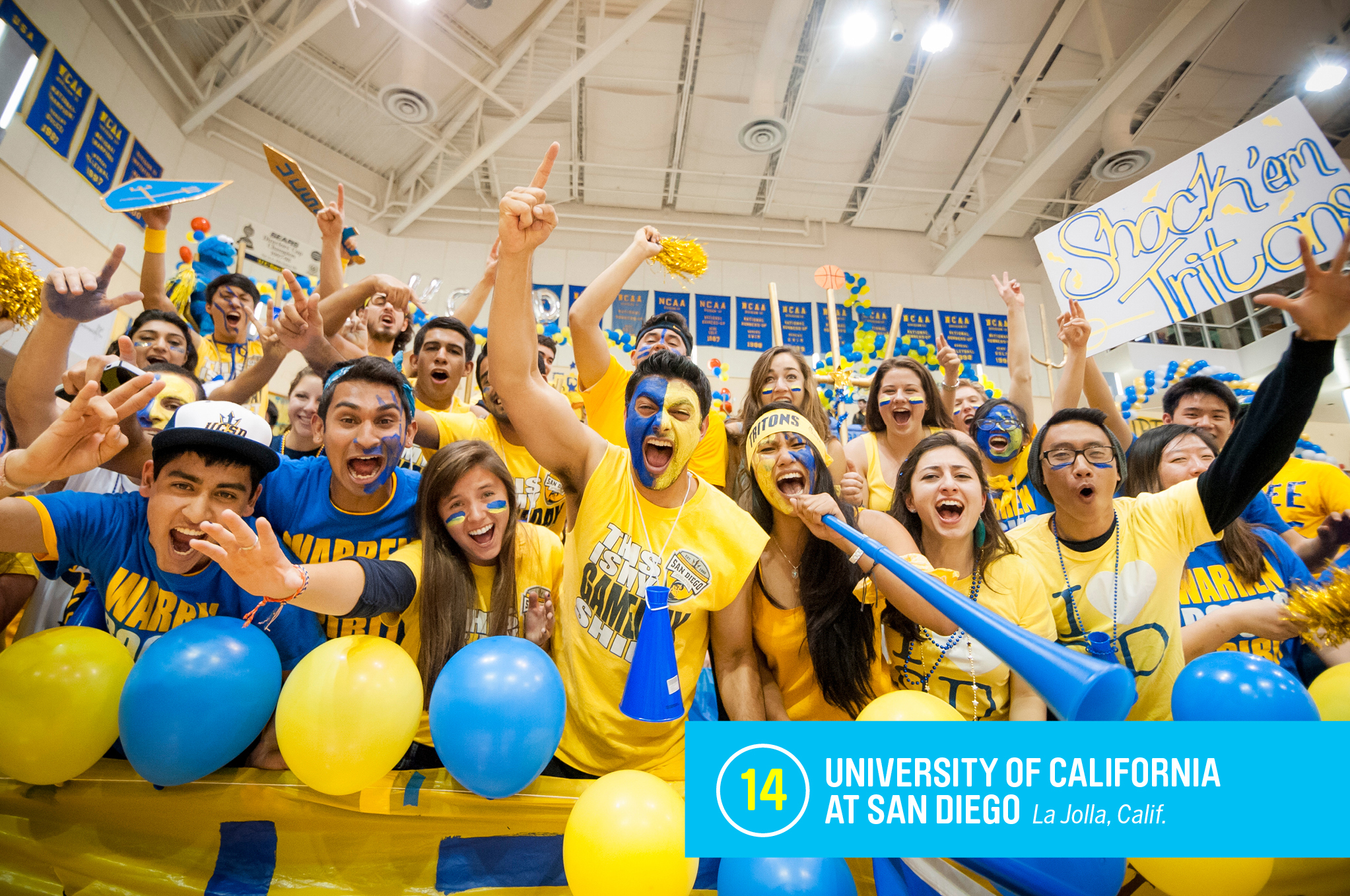 UC-San Diego is one of the top research universities in the country, with renowned science programs, especially in marine biology and oceanography. Like other colleges in the University of California system, the San Diego campus stands out for its comparative affordability for state residents. FULL PROFILE
Courtesy of University of Califo 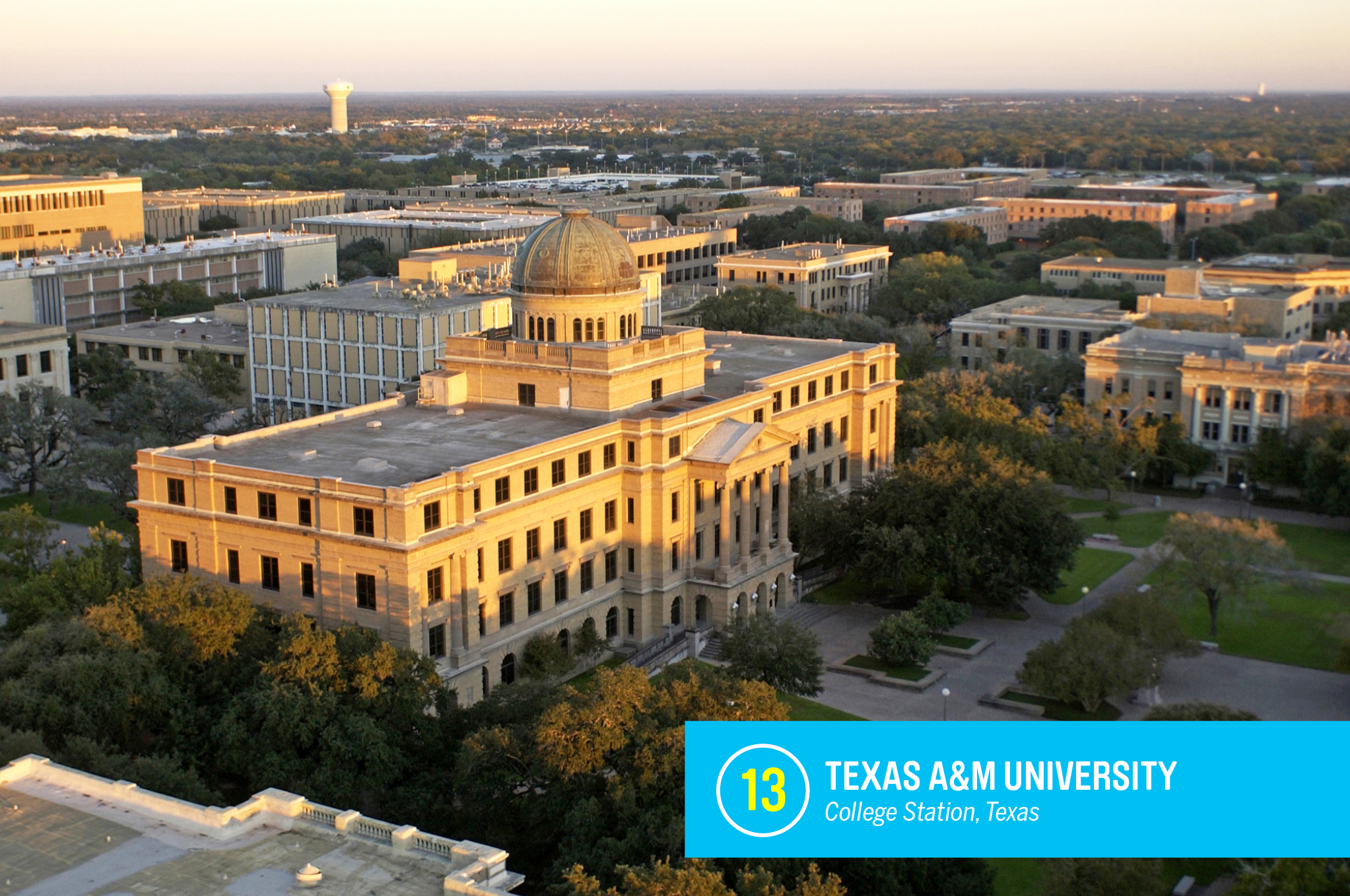 Texas A&M has one of the largest undergraduate student bodies in the country, with more the 40,000 students who graduate into an especially proud, loyal group of alumni. The college is well known for its business, agriculture, and engineering programs, as well as a recreation, park, and tourism management program. FULL PROFILE
Courtesy of Texas A&M 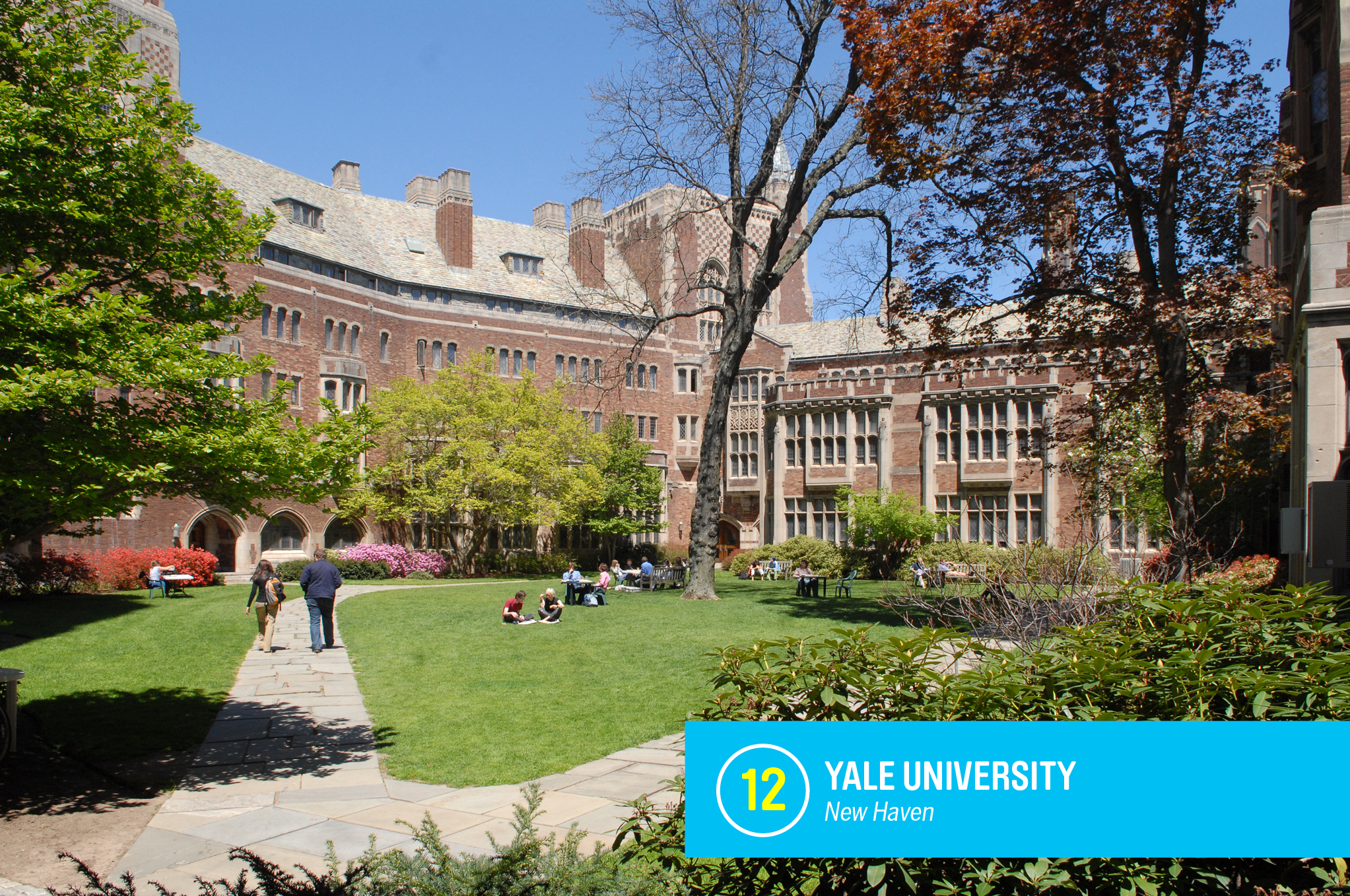 Like its fellow high-ranking Ivy League peers, Princeton and Harvard, Yale is highly selective. But for students who are admitted, the college promises a very generous financial aid package and courses taught by some of the world’s most extraordinary academics. FULL PROFILE
Courtesy of Yale University 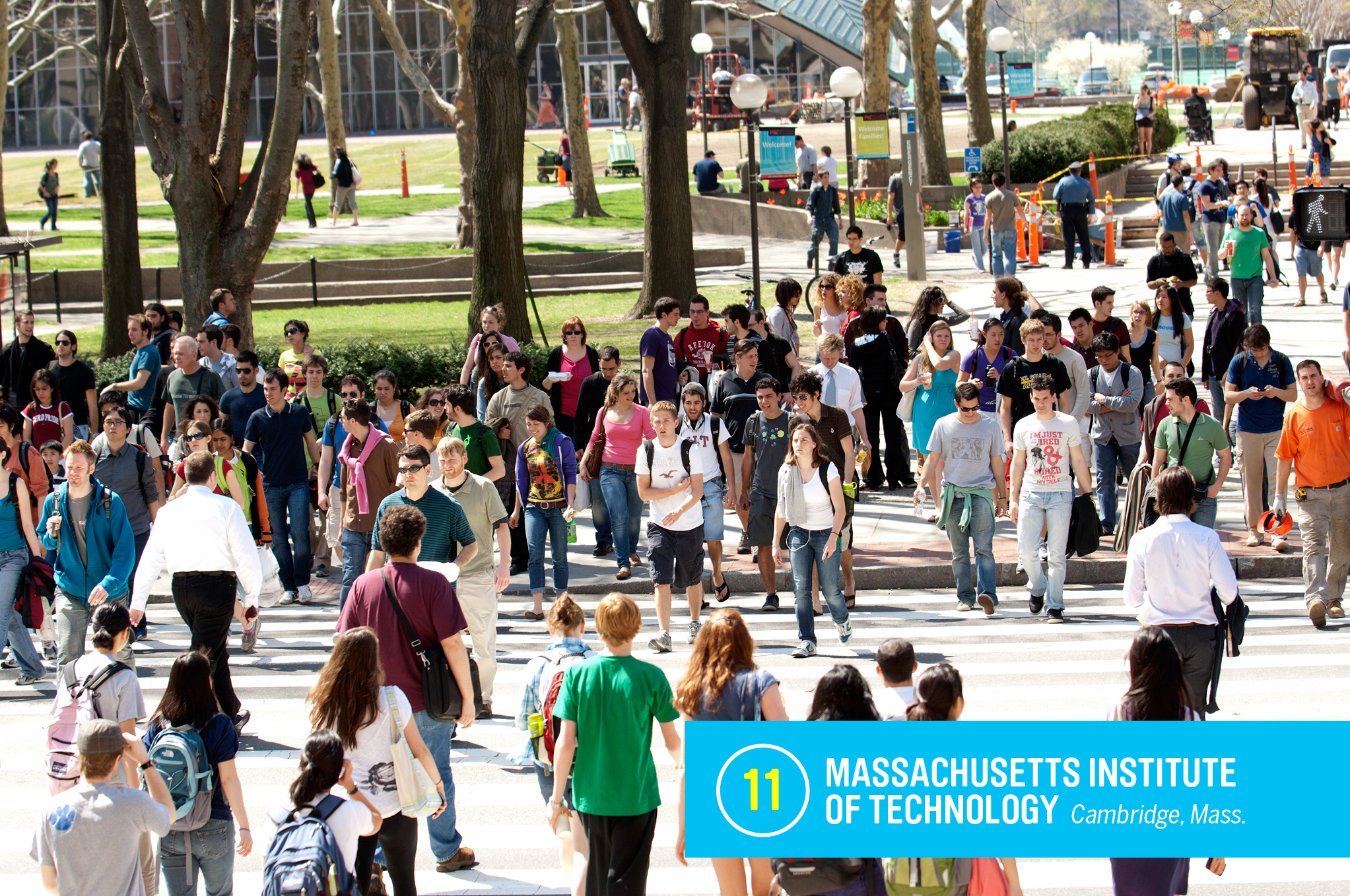 MIT is one of the best known and most respected science colleges in the world. It’s competitive selection process and grueling course load produces results, though—recent graduates boast one of the highest average salaries in Money’s rankings, according to PayScale data. FULL PROFILE
Courtesy of MIT 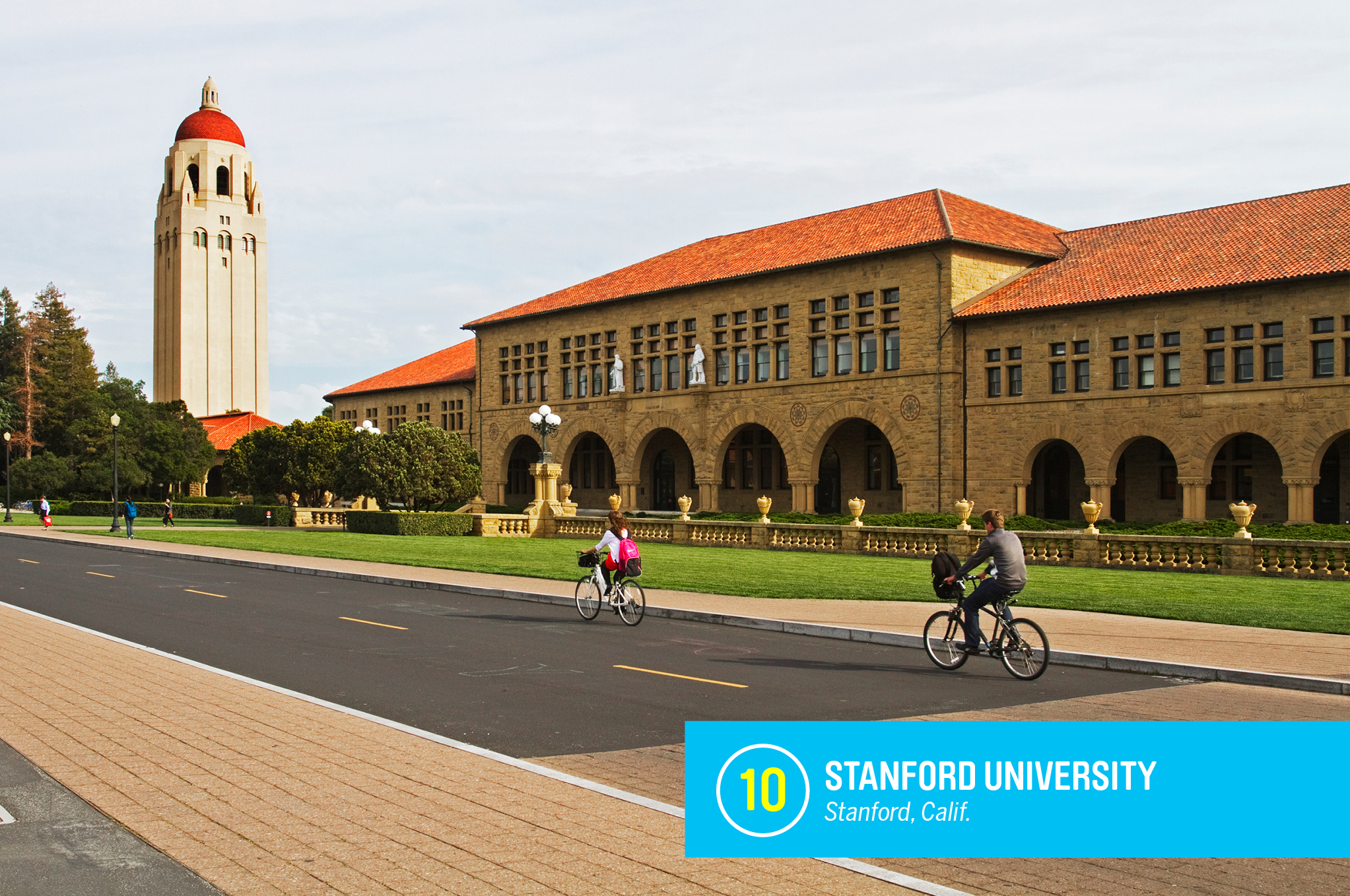 Stanford isn’t one of the eight members of the elite Ivy League, but it would fit right in. It’s the hardest school in the country to get into and has generous financial aid policies like Princeton and Harvard. But here’s a key difference: Recent graduates report average annual salaries that are $8,000 higher than those of Ivy League grads. FULL PROFILE
Getty Images 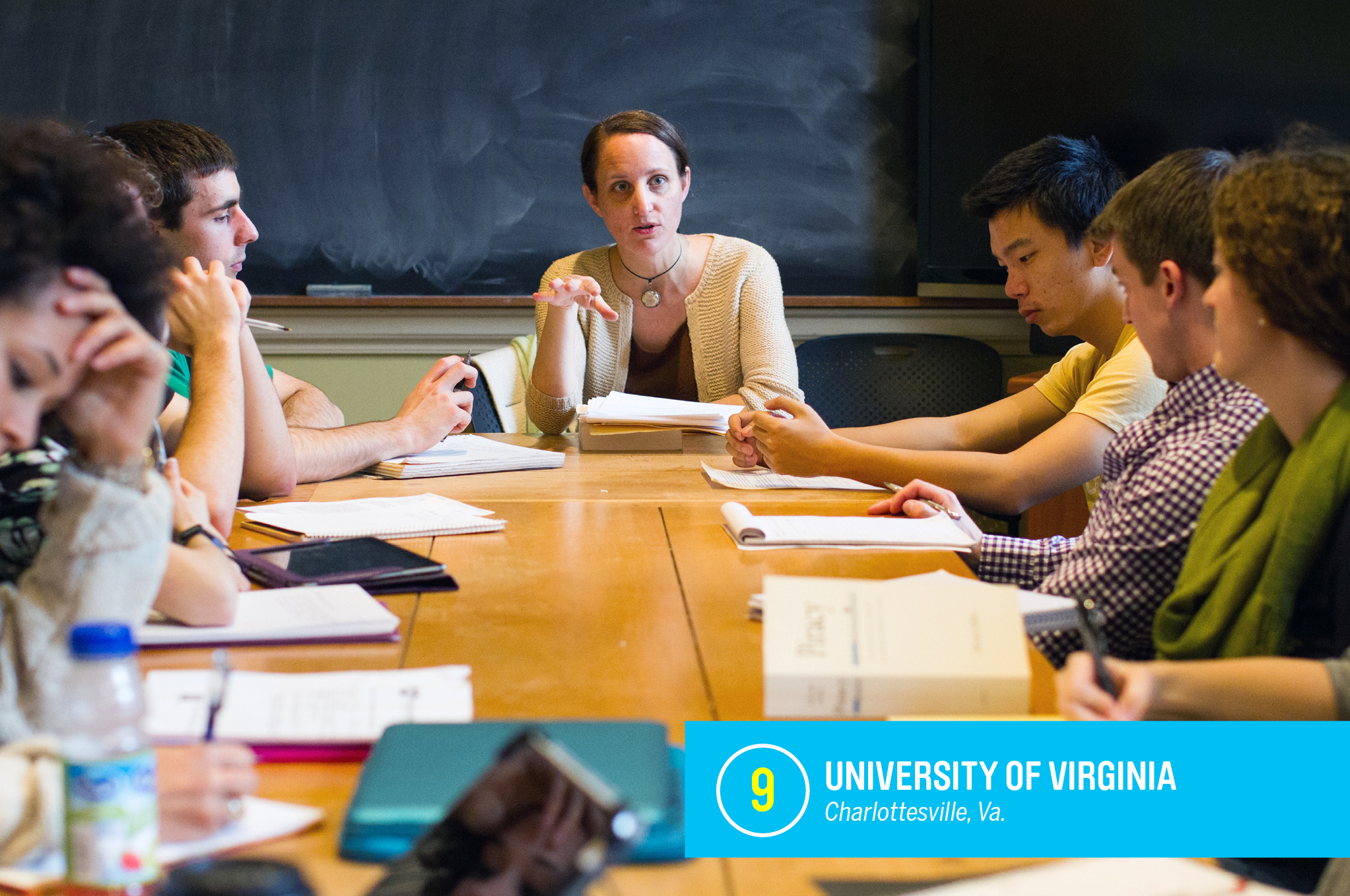 UVA boasts the highest graduation rate of any public university in the country, at 93%. The university’s academic strengths are wide-ranging, and the campus is the only U.S. college to be designated a UNESCO World Heritage Site, thanks its connection to founder Thomas Jefferson. FULL PROFILE
Courtesy of University of Virgin 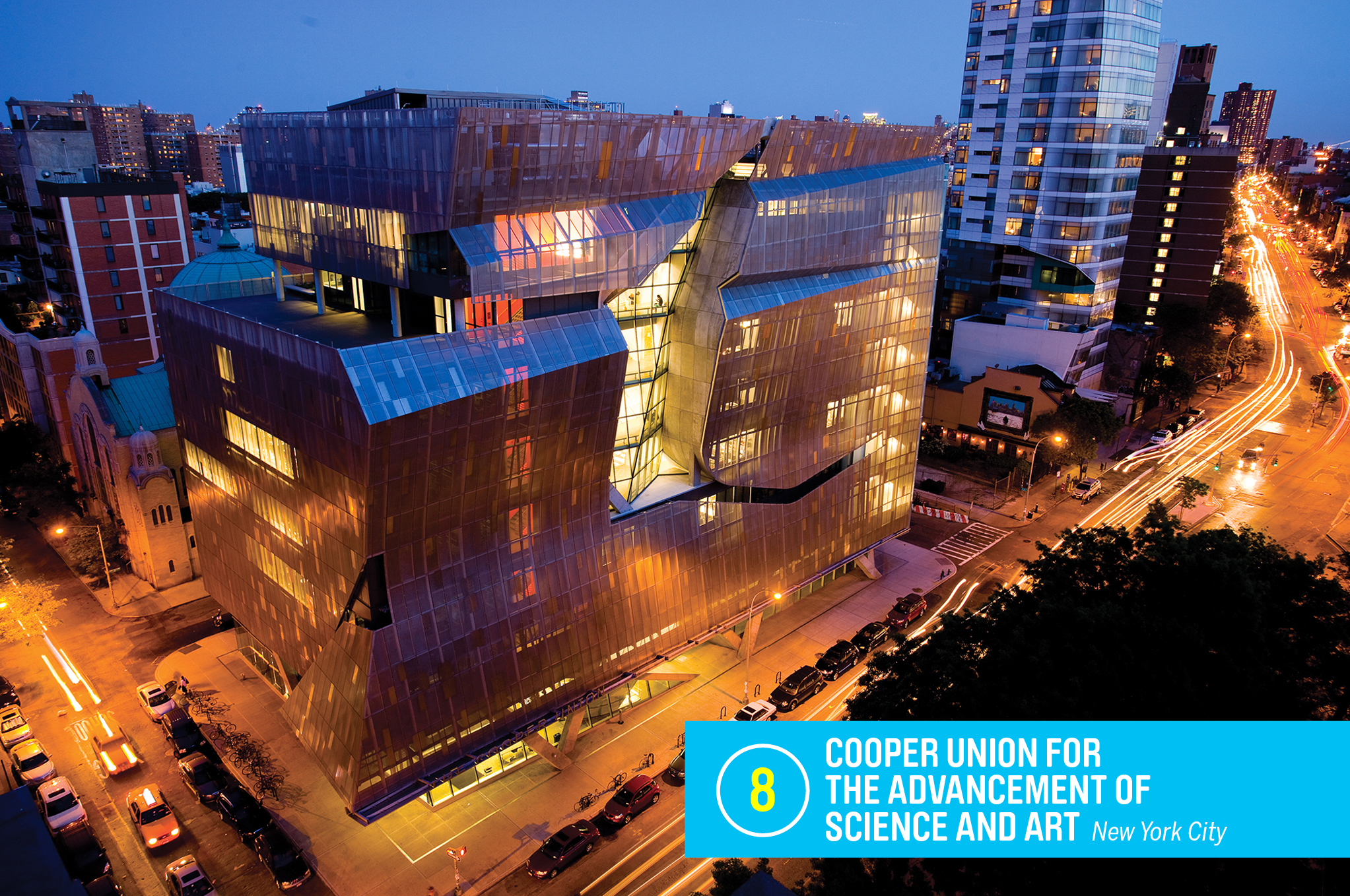 Cooper Union is unique—a small, urban school that offers degrees only in art, architecture, and engineering. Though Cooper Union no longer has the free tuition policy it was founded with, it’s still much more affordable than other elite private colleges. FULL PROFILE
Courtesy of Cooper Union 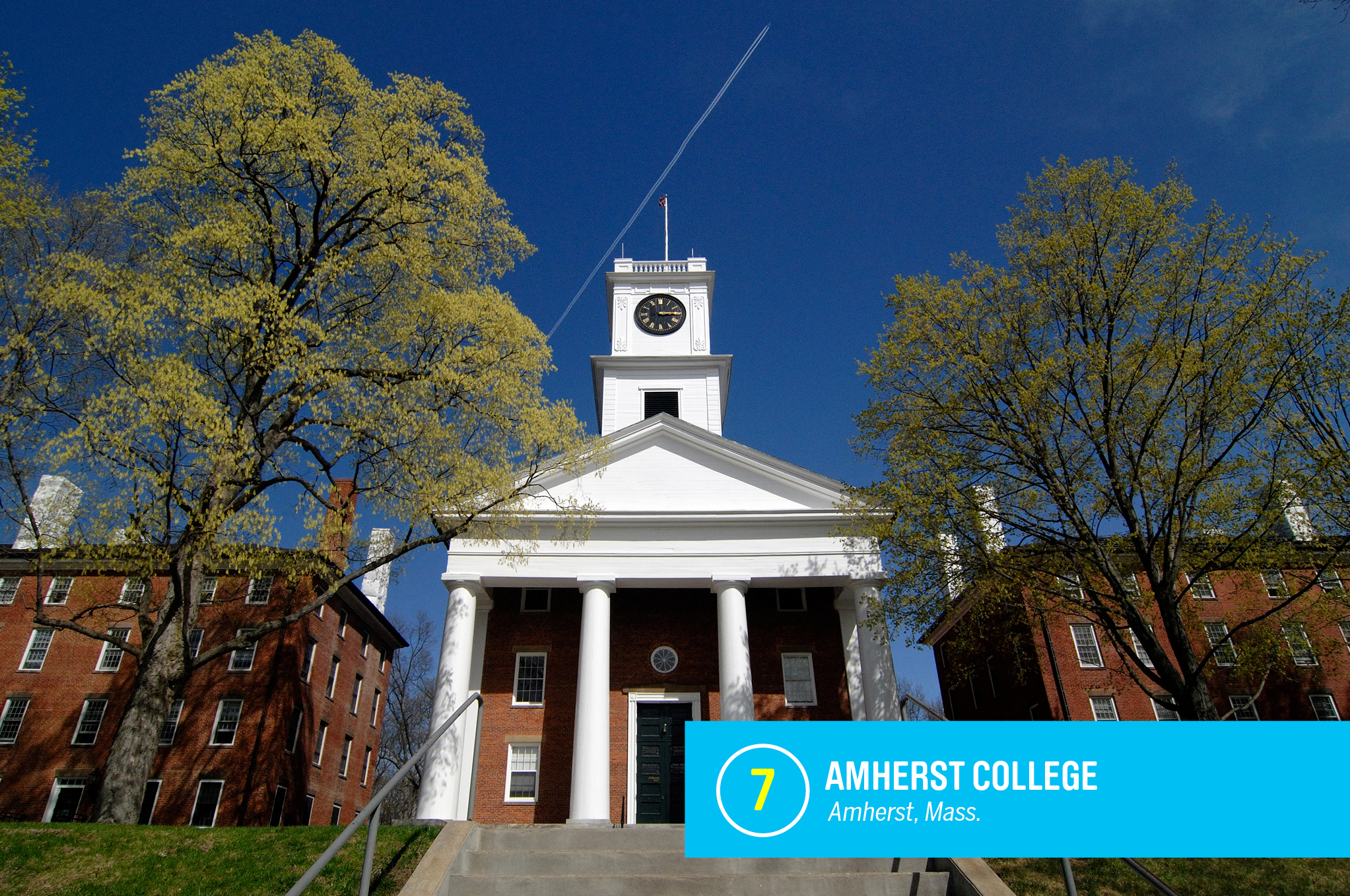 An elite liberal arts college, Amherst is one of a small group of schools that will meet 100% of the demonstrated financial need of students. As a result, more than two-thirds of its students graduate without taking out loans. FULL PROFILE
Courtesy of Amherst College 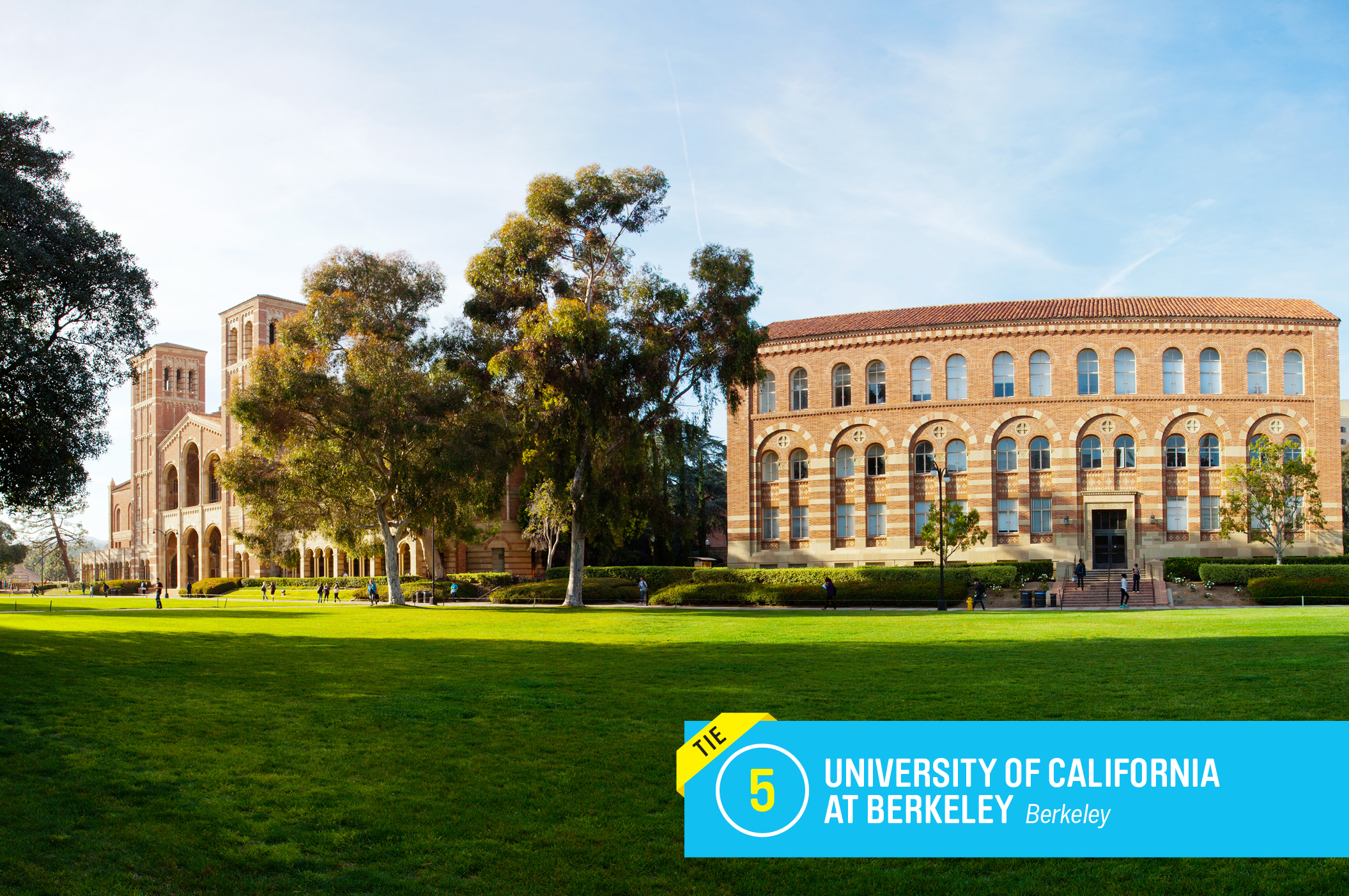 UC-Berkeley, or Cal for short, ranks the highest of eight University of California system schools that made Money’s rankings. In fact, Cal is one of the most selective public colleges in the country. More than 90% of freshmen graduate within six years, a rate well above even other elite public universities. FULL PROFILE
Getty Images 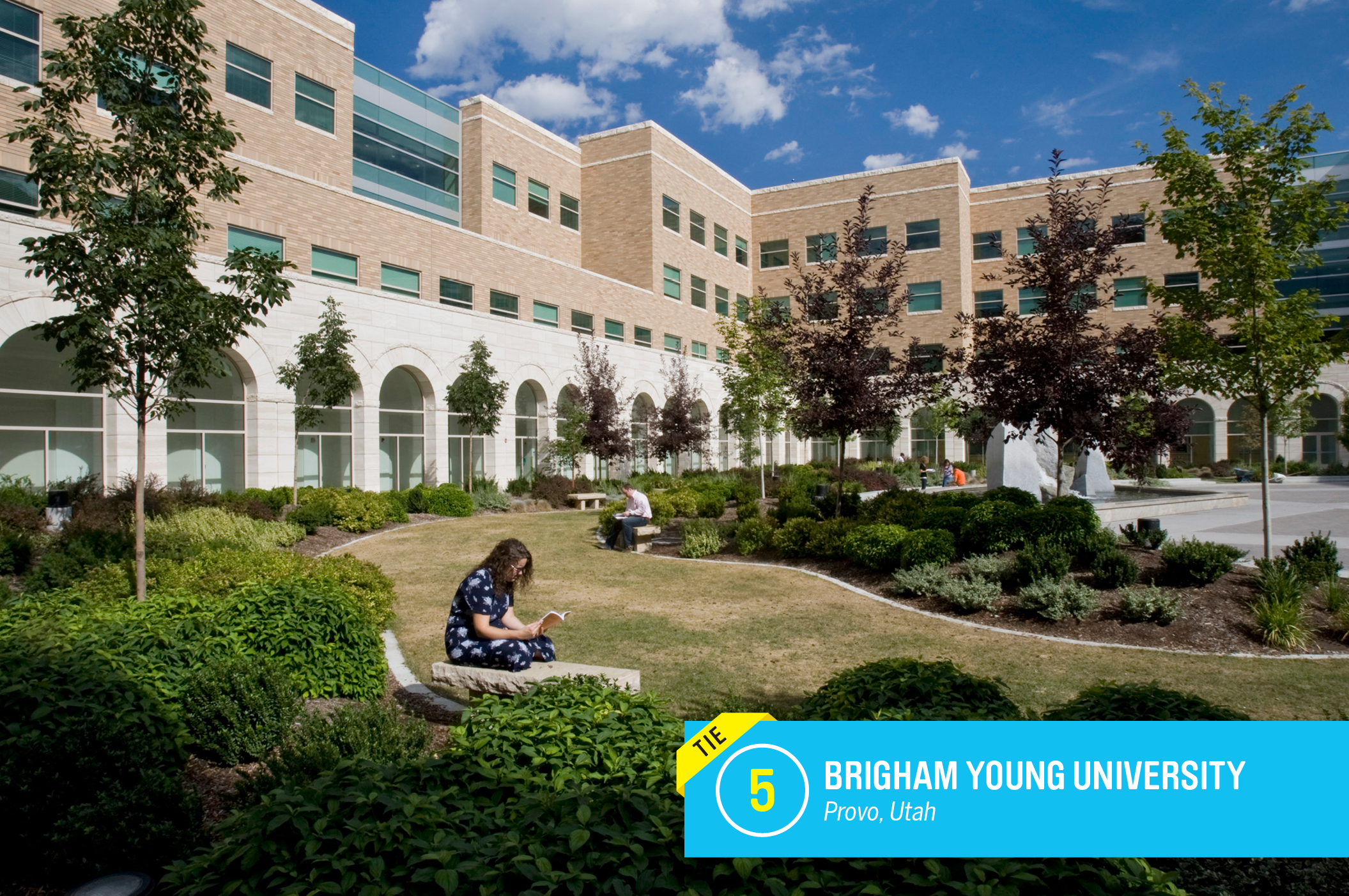 BYU-Provo is the main campus of a private college system specializing in educating members of the Church of Latter Day Saints. Non-Mormons can attend, but are charged more tuition and must obey the school’s strict code of conduct. The university has a high graduation rate at an affordable price for a private education. FULL PROFILE
Courtesy of Brigham Young University 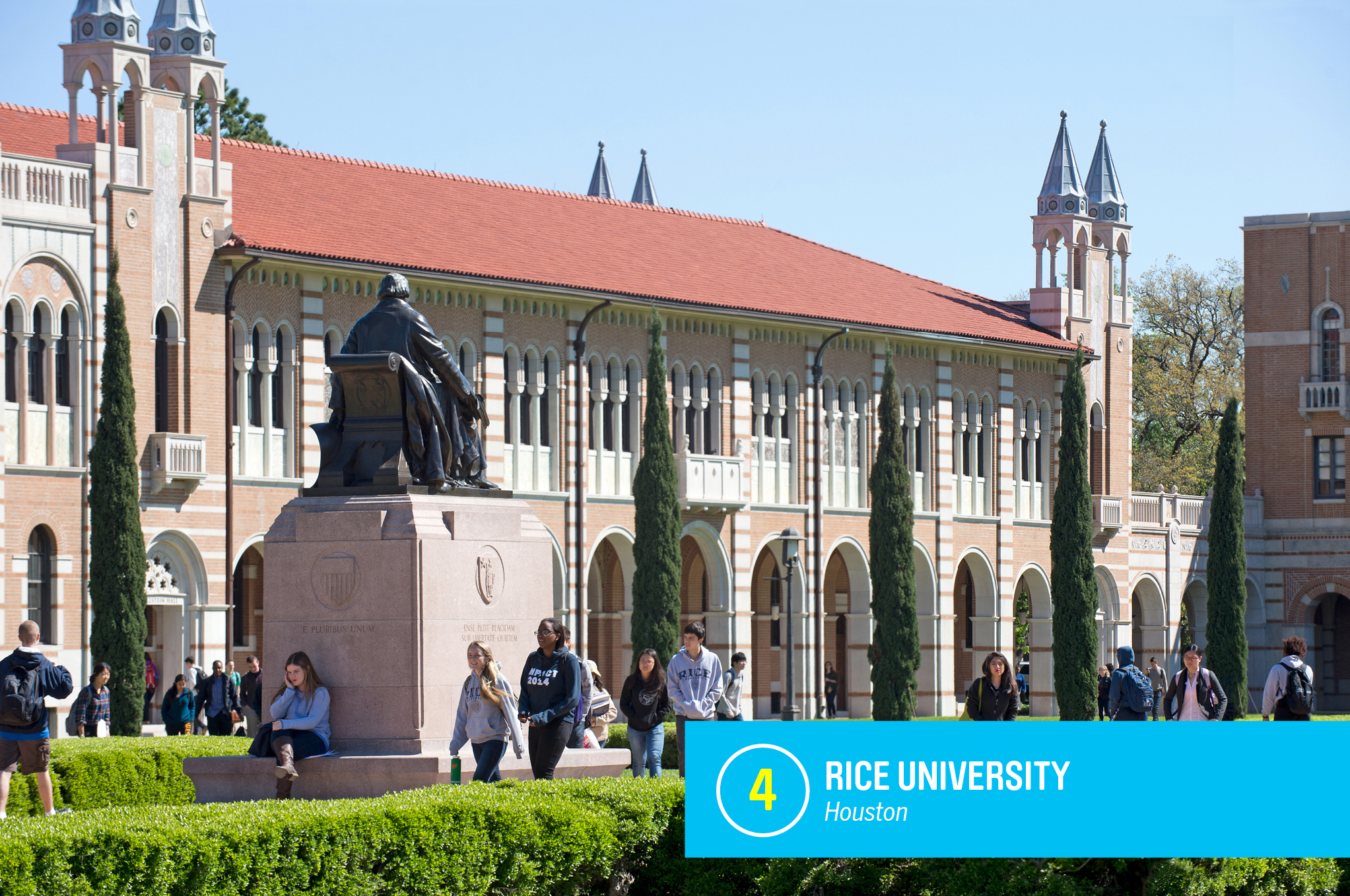 The typical Rice student majors in engineering, economics, or biology, and the university is also well known in the field of political science. Graduates of the selective private school fare well in the workforce: Recent grads out-earn their peers from similar schools by 16%, according to salary data from Payscale.com. FULL PROFILE
Courtesy of Rice University

Harvard may be the most recognizable college in the world, and it’s practically synonymous with the prestigious Ivy League. Like many of its peers, Harvard excels in Money’s rankings not only because of the outstanding education it provides but also thanks to its generous financial aid program. FULL PROFILE
Getty Images 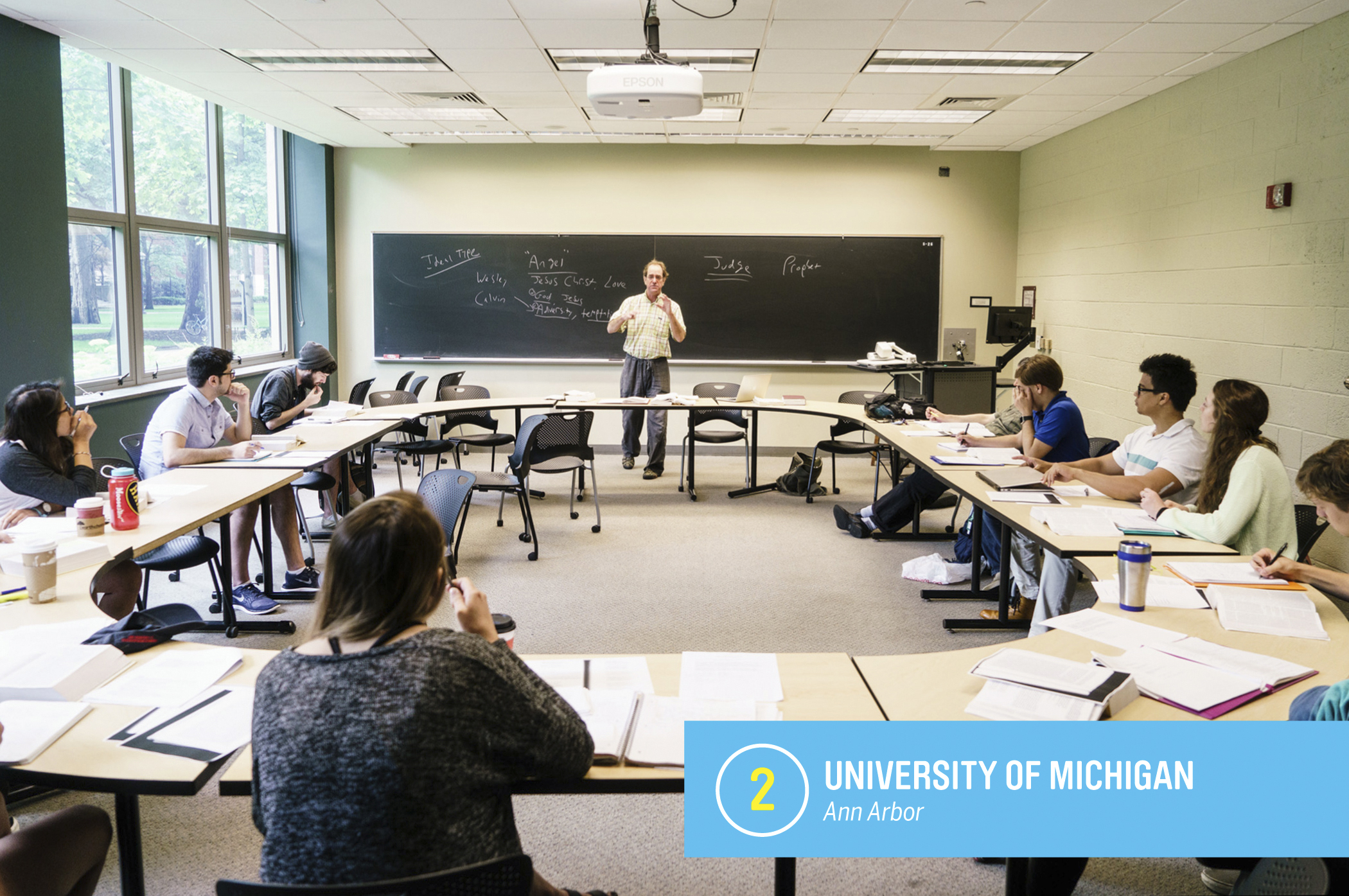 The University of Michigan accepts less than a third of the nearly 50,000 students who apply, and is nearly as popular with out-of-staters as with Michiganders. State residents who get in enjoy an especially good deal: Michigan is one of 11 colleges in Money’s top 50 where the average in-state cost of a degree is less than $100,000. FULL PROFILE
Dave Lauridsen for Money 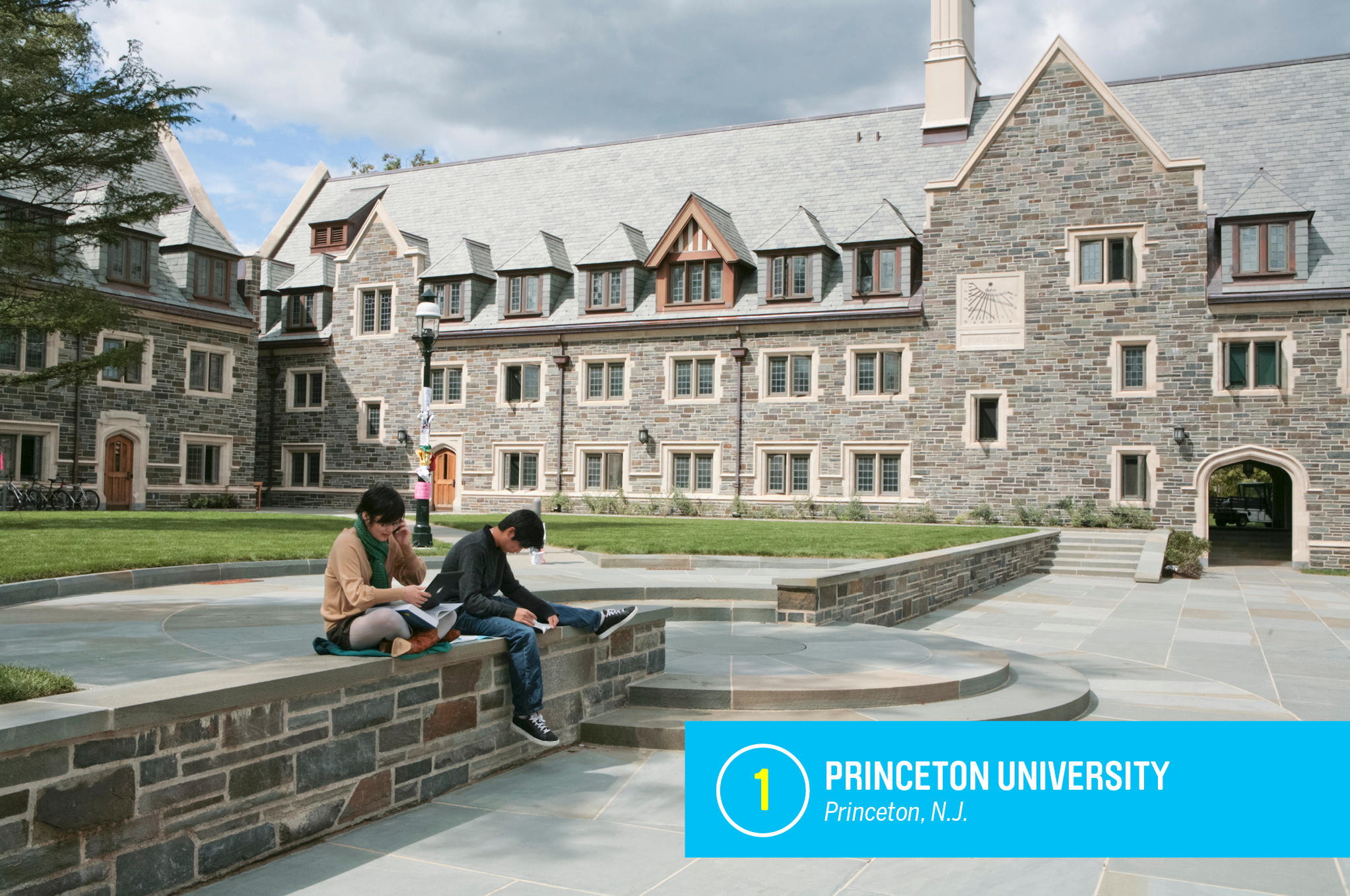 Princeton University's generous financial aid makes it, according to Money’s analysis, the most affordable member of the Ivy League. The school gives out such large grants to the six in 10 families who qualify (families earning less than $250,000 generally get some aid) that more than 83% of students graduate without any debt. FULL PROFILE
Courtesy of Princeton University
❮
❯
1 of 26

The 56-page policy memo released Wednesday borrows a lot from a list of servicing principles the department published in April, and it stems from long-established criticisms of a student loan servicing system. Borrowers' experience—and the information they received on their repayment options—largely depended on which servicer was randomly assigned their debt. Often, borrowers were pushed into plans, such as forbearance, that were quickest for the servicer, but not in the best financial interest of the borrower. The most flexible income-driven repayment plans, for example, can lower a borrower's payment to zero, but enrollment in those plans requires extensive outreach on behalf of servicers, Sarah Bloom Raskin, deputy secretary of the Treasury Department, told reporters on a press call.

Wednesday's memo calls for setting up economic incentives to encourage better outcomes for borrowers by tying compensation to performance indicators such as response time to a customer's inquiry, hold time, and the length of time it takes to process forms. Customer service would be reviewed regularly through audits of records and complaints, and there would be penalties for servicers that don't follow the guidelines, including reduced compensation in the future. The guidelines say borrowers can expect overpayments will go toward the loan with the highest interest rate, unless otherwise noted, and underpayments will be split in a way that keeps as many loans current as possible. The memo also describes the need for improved communication and better staff to interact with borrowers, and suggests a special focus on borrowers who are most at risk of default.