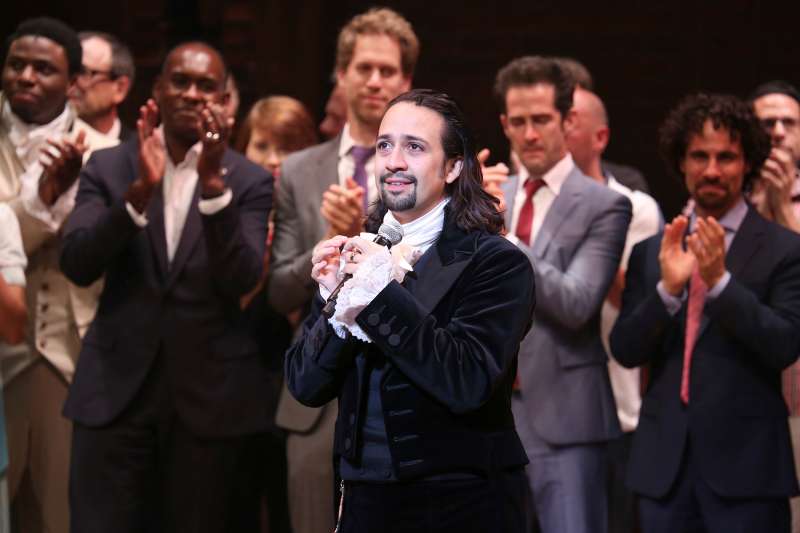 As hard as it is to believe, the “Hamilton” hype is reaching a new high, thanks to the final performance of the musical’s creator and star, Lin-Manuel Miranda. The last time Miranda is scheduled to be on the Broadway stage in the title role is the 8 p.m. performance on Saturday, July 9.

The show has enjoyed off-the-charts success from the get-go—even getting credit for making the U.S. Treasury cancel plans to replace Alexander Hamilton on the $10 bill—and the recent news that Miranda’s run as a performer would be ending has kicked up the excitement another notch. When it was announced a month ago that Miranda would hand over the title role, the cheapest seats in the house for the July 9 performance shot up to about $1,600, roughly 10 times face value.

As you’ll see below, prices for the final performance have only increased since then. Here are some signs—10 of them, of course, in honor of Hamilton’s spot on the $10—for how insanely popular “Hamilton” has been lately.

85 The number of hours some fans have been camping out at the box office in order to get a crack at buying tickets in the cancellations line during the last few weeks of Miranda’s performances.

#3 Spot reached on the Billboard charts by the “Hamilton” album in late June, just after the show won 11 Tony Awards. It is one of only three Broadway musical cast recordings in the last 50 years to crack the Billboard top 10. The album, which was released last fall, crossed the 500,000 sales mark in early July.

Read Next: ‘Hamilton’ Musical Has Thrown a Big Wrench Into Putting a Woman on $10 Bill

60% Increase over the past year in babies being named Hamilton, according to BabyCenter.com. Politically inspired names such as Jefferson and Hillary have also risen significantly over the past year, by 171% and 142%, respectively.

$849 The high-end price of a premium ticket to “Hamilton” after the producers recently decided to jack up prices—from $139 to $179 at the low end and $475 to $849 for the best seats. Harvard Business Review immediately declared the new pricing structure much “too low” because decent tickets have regularly been selling on the resale market for well over $1,000.

$60 Million Estimate from the New York Times for how much scalpers will make off of “Hamilton” ticket resales in the course of one year.

$2,700 The secondary market price for the cheapest seats in the house for Miranda’s final performance on the night of Saturday, July 9, as of Tuesday at the resale site SeatGeek. (You may see some cheaper prices listed online, but the price cited above has all fees included.) That’s easily about 15 times the face value cost of these seats.

$10,000 The asking price for a single ticket for an orchestra seat to Miranda’s final performance, listed soon after he announced July 9 would be his last show.

$1,400 Difference in asking price at StubHub for the cheapest ticket on July 9—Miranda’s final show—and the first show without him, on Monday, July 11.

$5,000 to $100,000 The price range for remaining tickets to a special July 12 matinee performance of “Hamilton” scheduled as a fundraiser for Hillary Clinton. There were some cheaper seats at first, but the $2,700 tickets are already sold out. What’s left are options including the $5,000 “preferred seat,” the $10,000 “premium seat” (featuring a photo reception with Clinton in addition to admission), and the $100,000 “Event Chair” option, which bundles two premium seats, a wrap party with Clinton and the cast, and an invitation to the Democratic National Convention. Alas, none of these pricey tickets comes with the opportunity to see Miranda in action on stage, because he will have already taken his final bow.

$6.4+ Million How much Lin-Manuel Miranda will make in one year due to the various roles he played in the production of “Hamilton.” And his earnings will only grow as more productions are staged across the U.S., and if and when a movie version is ever made.