Why You Should Ignore Career Advice to "Do What You Love" 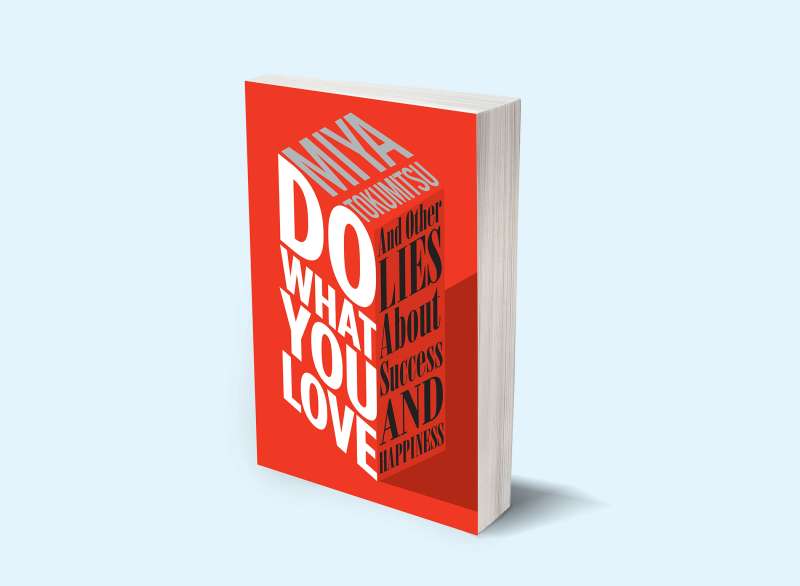 Miya Tokumitsu is a contributing editor at the self-described “radical” magazine Jacobin, a PhD in art history, and the author of the new book, Do What You Love and Other Lies About Success and Happiness, which came out today. In it, Tokumitsu examines the ubiquitous career advice that we should pursue our passions, criticizing it as a luxury of the privileged—and a destructive idea. Tokumitsu spoke to Money by phone about the trap of contemporary Do-What-You-Love (DWYL) culture.

“Do what you love” isn’t the only piece of career advice out there. Why does it deserve its own book?

Particularly in American contexts, DWYL really hits all of the sweet spots of various connected cultural values. There’s a deeply entrenched sense of a work ethic—the idea that your work and your attitude towards it are expressions of your morality and character. And then there’s a newer belief that comes out of what Tom Wolfe called the “Me Decade,” which is the belief that your individual sense of self is extremely important.

“DWYL” fuses those two deeply held cultural values in a way that’s very appealing. This book is really the result of hearing and seeing these tropes of precious, lovable work over the years—from Steve Jobs’ graduation speech at Stanford and Oprah’s self-love culture to mantras on Pinterest and Instagram—and recognizing that they had rubbed me slightly the wrong way.

What bothered you about them?

For people who actually embrace the idea of DWYL, it really opens them up to exploitation and redefines the terms of negotiation between a worker and an employee. The work becomes something done not for wages, but for pleasure and moral self-improvement. Once that narrative takes hold, it becomes really hard to move the conversation back to the nuts and bolts discussion of wages and benefits. That whole discussion becomes crass.

What if we take DWYL out of an exploitative context? The U.S. is built on myths—what’s so bad about one that helps people find meaning in the sometimes mundane day-to-day?

I think work as hope and love can exist. A basic example would be within a monastic community, where there seems to be a ritualistic and spiritual aspect to even mundane tasks. But when you have DWYL as a cultural value within a fundamentally competitive context like the capitalist free market, personally, I think there’s no way that it can’t eventually become exploitative. The labor marketplace is eventually going to absorb DWYL values to its own ends.

There’s an undercurrent of hope in the book. What are you pushing for?

The potential that I want to open up is, let’s just take this whole DWYL framework and chuck it out the window. Let’s think about what work in our world actually needs to be done. There’s a belief that the market is an objective sorting device for what’s important and what’s not. Actually, a lot of the work that is the ground zero of maintaining society is done for free and by women. It’s the least valued monetarily and socially. Values are actually being completely turned upside down by the market.

So what do you suggest readers actually do about that?

I would like workers to really ask themselves: How is this job contributing to how I care for myself and for the people that I care about? There’s this sense that you have to take each and every work opportunity without really thinking about what good it’s doing you. I also think it’s extremely important to join your union or workers’ organizations. Some unions are better than others, and if you find that your union isn’t one of the better ones, it’s really worth the effort to try to change that from within to the extent that you can.

So the advice of your book is not necessarily that you shouldn’t “do what you love.” It’s that readers shouldn’t feel obliged to love everything they do simply because there’s cultural pressure.

It can be a bit of both. With unpaid interns in the U.S., I’ve pointed out that they’re often not protected against discrimination and sexual harassment. I had a conversation recently with a young artist who was asking, “Should I get an internship or work at Starbucks?” That’s a decision everyone has to make for him or herself. But what you get out of Starbucks is a paycheck and that it’s illegal for your manager to sexually harass you. That’s not nothing—there’s a reason people fought really hard for that.

Also, I would like readers just to be aware that when you are working, you are a worker—that’s not something shameful. Knowing it will help you protect your actual interests. And if you’re out of the DWYL framework, a bad day or a horrible mundane task, even at a job that you really love, is going to be way less devastating. It’s easier to shrug off a bad day at work than to have it turn into, “Maybe I’m doing the wrong thing with my life. Is this what I’m meant to do?” DWYL can really lead to all sorts of unnecessary mental anguish.