You Need a Better Bank 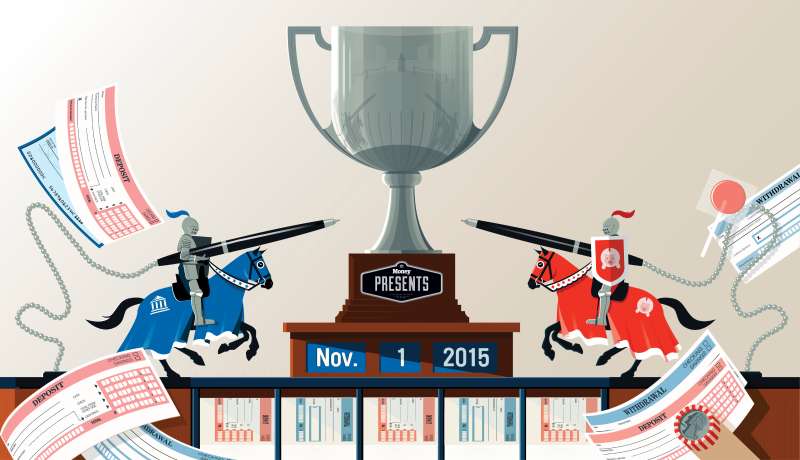 In today’s low-yield world, searching your sofa for change might give you a higher return than your bank account does.

The average brick-and-mortar savings account now delivers a mere 0.08% in interest on a $10,000 balance, down from a measly 0.1% last year, Money’s annual survey of the biggest banks in the U.S. has found. That’s just $8 a year. Checking accounts pay even less. And yields will probably stay low for a while longer—when the Federal Reserve raises interest rates, it takes eight months on average for banks to boost rates on money market accounts and 14 months for interest checking, according to a 2013 Fed study.

The penurious payout banks offer makes the fat fees they charge even more egregious. At brick-and-mortar banks, maintenance fees on checking accounts run $14.89 a month on average—$179 a year. Avoiding the fees typically requires a $3,250 balance, up from $2,500 last year. (In most cases, even signing up for regular direct deposits won’t cancel the fees anymore.)

Need cash? Almost 75% of traditional bank accounts still charge a fee if you use an ATM outside the network. And those fees have grown to an average of $2.46 per withdrawal this year, Money found, from $2.30 in 2014. Those dollars add up: Nearly a third of ATM withdrawals are from out-of-network ATMs, according to banking technology company Personetics Insights.

Consumers seem to have become inured—curiously, they even reported higher satisfaction with banking fees, says J.D. Power. “Customers get used to it,” says Jim Miller, who covers banking services at J.D. Power. Customers also tend to underestimate how much they pay in ATM fees, according to Personetics Insights.

Demand better. “There’s still plenty of free accounts out there,” says Bankrate.com chief financial analyst Greg McBride. “Consumers are not hostage to rising fees and balance requirements.” Just by moving to a bank with no maintenance fees and no ATM fees, Money estimates that you could save more than $360 a year.

Choosing a bank can be a deeply individual process—a mid-career professional with a full-time job, direct payroll deposits, and substantial savings will have different priorities than a frequent traveler who just wants cheap access to cash. But it shouldn’t be a costly one. Money surveyed 75 of the largest U.S. banks to find the lowest fees, highest yields, and best perks. Whether you want a teller to greet you by name or a mobile app to handle all of your banking, Money has found the best bank for you—one that earns your satisfaction.

How Money Chose the Best Banks

For Best Mobile App, we considered banks with apps that offered the most important mobile banking features and checking accounts that met our fee and yield criteria, then tested the apps for ease of use. Convenience winners were chosen based on ATM networks, branch locations, and hours.